It looks gorgeous, it’s got a great pedigree, and there’s a real buzz about the Artega GT. We try it out 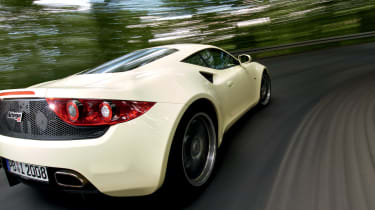 The name ‘Artega GT’ should be registering a flicker on the edge of your daydreams by now. There have been serial motor show appearances, an outing at this year’s Goodwood Festival of Speed, a rumbling ‘shouldn’t the Lotus Evora be more like this?’ in the blogosphere and an unusual degree of media positivity for a project so new, untested and ambitious (Porsche Cayman in the cross-hairs). All contribute to the impression that Germany’s latest mid-engined, two-seater coupe is poised for great things when the first dealer demonstrators roll out of the brand new factory on the outskirts of Delbrück at the beginning of September.

As an exercise in lean, fast-track design and development that avoids the inertia and straitjacketed thinking of large manufacturers – and a more effective harnessing of ‘all the talents’ than Gordon Brown could even begin to understand – the Artega story already makes heady reading. Indeed, given all it’s got going for it – a stunning shape fashioned by erstwhile Aston design ace Henrik Fisker, engineering input from former Porsche technical designer Hardy Essig and everything that stems from the financial and technical backing of motor industry electronic systems supplier Paragon AG (including its CEO, Klaus Dieter Frers, previously head of Rolls-Royce) – it seems entirely possible that some major egos in the sports car sector may have to run for cover.

Then there’s Karl-Heinz Kalbfell, the man responsible for bringing the Artega GT to market and himself in possession of a formidable CV that includes helping shape the fortunes of BMW, Rolls-Royce and Maserati. It has to be significant that, on our day in Delbrück with the most completely honed version of the Artega GT yet – yes, it’s the pre-production car from Goodwood but with further modifications to the steering and transmission – he turns up for breakfast in a Porsche Cayman S. Not quite sleeping with the enemy, but close.

Along with the eggs and bacon, he chews over the figures and the philosophy: ‘This year we have in mind to build at least 100 cars. But to start in this business with some new messages and new technologies, you have to be careful. Quality comes first. We cannot send out cars that have any problems. From next year onwards, when the factory is running closer to capacity, we plan to make two cars a day. So this gives us the opportunity to go for 300-350 cars a year. The year after we don’t want to grow much. In line with the business plan, about 500 cars.’

From the start, Kalbfell made it clear that he would only be part of the Artega enterprise if the team concentrated on making a proper road car first, this cutting against the general feeling that a hardcore, track-orientated coupe might be the way to go. Kalbfell explains: ‘I said ‘‘do you want to make a hobby or do you want to make a business?”. The car has to have road capabilities.’

Pure chassis ability was always a prime consideration but only within the context of the overall package envelope. Engine note and delivery, the DSG mapping, driving position and seat comfort all contribute to the broad definition of driver appeal. What the Artega team has been working towards isn’t an insanely fast car but one with seamless technique; one that fuses dynamics and performance so cohesively that driving becomes a singularity rather than a sequence of set pieces.

Anyway, time to find out what it all means. And what’s immediately obvious seeing the Artega in the flesh for the first time is that while vanilla yellow isn’t the most photogenic of colours, you could paint this car ditchwater brown and it would still look modestly amazing. Proportioning that marries the length of a VW Polo with the width of a Mercedes S-Class and the height of a Lamborghini Gallardo predictably lends it a certain broad-shouldered menace but the flattened snake-head nose with its gaping, downturned ‘mouth’, the deep-seated haunches, the tarmac-Hoovering stance and the exquisitely rounded (dreamily McLaren F1-like) tail treatment deliver an almost perfect definition of understated aggression.

It reflects a singularity of purpose deliberately light on quasi-exotic gesturing. From the outset, habitability and high standards of build were cornerstones of the design. It was always the intention that the Artega GT should have plenty of reach as an everyday proposition. Pure in purpose but pragmatic in execution.

Beneath the carbon-composite skin, an aluminium spaceframe is the major structural cell while a steel frame is used as the drivetrain carrier, cradling the 3.6-litre V6 and six-speed DSG sequential gearbox from VW (essentially lifted from the Passat R36). During development, the Artega grew from 395 to 405cm in length and the engine moved slightly forwards. It’s neither truly mid- or rear-engined but in between.

If 296bhp doesn’t sound too promising by today’s power-bloated standards, it isn’t meant to. The key to the Artega’s performance is its 1100kg kerb weight. Dial that in and the resulting power/weight ratio of 273bhp/ton comfortably sees off the 219bhp/ton of the Porsche Cayman S. And so should the claimed sub-5sec 0-60mph time.

Getting in and out is remarkably easy for such a low-slung car and once installed in the leanly padded but extremely comfortable bucket seat you can better appreciate the surprisingly generous elbow and headroom. Driving position, pedal spacings and control weightings are so good, so right, you’d swear they’d been tailor- made. As you might expect, the instruments are innovative, the small binnacle in front of the driver containing a composite analogue speedo and rev-counter sharing a single axis – the rev- counter forming the upper arc, the speedo the smaller, lower arc – supplemented by solid state representations of analogue auxiliary dials. It’s simple, stylish and works well without giving the impression of ‘electronics for electronics’ sake’, as Kalbfell puts it.

The rest of the interior is cleanly designed and well packaged, with plenty of room behind the seats for luggage, though the centre console, face-level air vent and, in particular, the DSG transmission selector lever have little visual or tactile interest.

So let’s not dwell on that. The defining moment in the Artega GT is moving off. The first 500 metres tells you almost everything you need to know. There’s something about the steering; about the way it requires so little effort yet says so much. It melds precision with purity and feel in a way that makes other super-direct helms – a Caterham Seven’s for example – feel lumpy and grubby by comparison.

Neither can I easily remember feeling more immediately at one with a car. The Artega seems to have very little interia. It changes direction with an immediacy more usually reported at UFO sightings. It’s so light and closely-coupled to the road, you sense the bumps, dips and ruts rather than feel them.

No hanging around, either. Press the accelerator about half way and the hollow, almost V8-like yowl of the 3.6-litre, narrow-angle V6 hardens to a rude and robust back-of-the-throat growl and spits the car aggressively down the road. The engine delivers hefty thrust from modest revs and kicks again at about 3500rpm, sustaining an almost violent level of acceleration all the way to the red line. The Artega feels even more potent when the steering wheel paddles are brought into play, the extra degree of control allowing slightly early upshifts that snap the revs back into the heart of the torque band.

All right, there’s some wind noise and the throaty exhaust has a tendency to boom in the 2000-2500rpm band. But these are small points that will be fixed. Its chassis has sensitivity and finesse in spades, but its levels of stability and composure are even more remarkable. It feels reflexive, instinctively correct in its actions. Everything it does, even at low speeds, is beautifully resolved. You don’t need to drive it fast to feel special. That can come from the immediacy of the controls, the sensational ride – almost racer firm yet supple – and even the lean, clean perspectives of the cabin.

No flab, no filtering, no blurring of intention. If ever there was a grip ‘n’ go sportscar, this is it. In fact the only barrier to success could be the price. A car to this spec will cost the thick end of sixty-five grand, and that puts it not into Cayman S but 911 territory. But then, the Artega GT drives with the kind of accuracy, fluency and intimacy it’s rare to experience at any price.