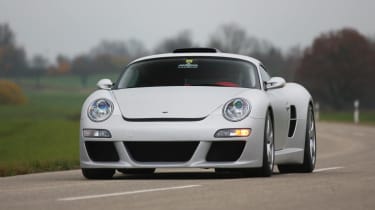 If the Ruf CTR3’s appearance seems a little odd, at least it isn’t in the usual way. Rather than being modestly off-beam, think of ‘little’ as an average drawn from disparate extremes. Approach the 420,000-euro Ruf from the side and it looks so strange your eyes will grapple with the image like an autofocus lens trying to lock on to an object with no straight edges. And it’s true, the CTR3 has none. Walk round to the front and the feeling of mild panic slowly dissipates as, step-by-step, the shape eases into something more reassuringly 911-esque. Circle to the back and any residual oddness flutters away to zero as the awesome width and race-car architecture of the tail seem to erase the preceding visions.

But not quite. For all the drama and aggression of the rear end, there’s something faintly feminine about it. Those Cayman tail lights. In fact, I reckon that if a 911 were fired through the arse of a Cayman at close to light speed by a larger version of the Large Hadron Collider and a photograph taken a trillionth of a second after the impact, the result would look pretty much like the Ruf CTR3. A fascinatingly reproportioned hybrid some 5in wider than a 911 and a still more unlikely 4.5in lower.

This is the car that Alois Ruf has wanted to make ever since taking the reins of the Pfaffenhausen-based company from his father, Alois Ruf Snr, at his death in 1974: a no-compromise, premier-league supercar designed from the ground up. Not one saddled with the rear-slung engine of the 911, nor a modified edition of the mid-engined Cayman with a ridiculous amount of power.

There are Ruf Caymans that will embarrass any stock 911 this side of a 997 GT2 on a track, and here too, in the Ruf tradition, a line has been drawn. We’re talking a true Enzo/Koenigsegg/Veyron-class exotic that, apart from anything else, would fill the void left by Porsche’s own ‘best game’ contender, the now defunct Carrera GT. But the CTR3’s ambition – as well as exceeding that of the original and now legendary 469bhp CTR ‘Yellow Bird’ and the 520bhp CTR2 that followed a decade later – reaches beyond even that of Porsche’s fastest ever production car.

Significantly, the CTR3 made its debut at this April at the opening of Ruf’s new factory, located in the grounds of the Bahrain Grand Prix circuit at the behest of the car maker’s wealthiest fan and customer, the Crown Prince of the Kingdom of Bahrain, Shaikh Salman bin Hamad Al-Khalifa, the man also responsible for bringing Formula 1 to Bahrain. Hard to imagine friends in high places living at a higher altitude than that. The truth is, Ruf knows precisely where its most lucrative market resides, and having a physical presence at its heart in these troubled economic times may well turn out to be a lifeline, because Ruf’s sales in Germany have all but flatlined.

Enzo drivers out for a Sunday afternoon V‑max thrap on an unrestricted autobahn might well be grateful: one less car capable of filling the rear-view mirror. And the appearance of the not-a-911 would be sudden. The Ruf CTR3 has 691bhp and a claimed top speed of 235mph, a breezy 15mph clear of the Ferrari’s. If the claim is good – and Ruf has a reputation for not exaggerating – then only a tiny group of production supercars are faster, and then not by much. But that won’t concern Alois Ruf. Chasing the biggest figures has never been an obsession for him. Like Gordon Murray said of the McLaren F1, the astonishing performance is a consequence of the car’s design and engineering, not its aim.

The CTR3 began as a completely pure, clean-sheet design called the R50, and two prototypes were built. But the sheer effort and number of man hours required to push through to production ultimately proved too much and the car was re-engineered around the front platform of a 911 GT3 RS. From the A-pillars back, though, it’s all Ruf and quite amazing.

Although the CTR3 is the same length as a 911, its wheelbase is a whopping 10.8in longer to accommodate the repositioning of the twin-turbo flat-six engine (increased from 3.6 to 3.7 litres and based on the 996 Turbo’s powerplant, not the 997’s) so it sits in front of rather than behind the rear axle. It’s cradled by what Ruf calls ‘the Birdcage’ – a tubular rear subframe engineered in conjunction with Canadian motorsport and chassis specialists Multimatic that is both immensely rigid and a thing of beauty (billet aluminium is used extensively throughout and the trick horizontal coil-over dampers are conspicuously showcased). Anyone expecting double wishbones all round to be de rigueur for this type of car will be disappointed; the rest of the rear suspension is a multi-link arrangement, while the front has the 911’s MacPherson struts and anti-roll bar.

Using essentially the same motor as Ruf’s 911-based Rt 12 but with another 50 horsepower, the CTR3’s 691bhp at 7600rpm is supported by an equally solid 656lb ft of torque at 4000rpm, and it’s all directed to the rear wheels via a six-speed sequential transmission built by Hor. No, there aren’t any steering-wheel paddles and, yes, there is a clutch. Nudge the long aluminium gearlever forwards, feel the mid-point resistance and push through it. You’ve shifted up a gear. Pull back, again through the mild resistance, and you’ve shifted down. Not the work of milliseconds, maybe, but nicely old-school hardcore and, as the first tentative warm-up miles roll by in Ruf’s matt silver ‘no.1’ car, curiously satisfying.

The CTR3 isn’t quite as light as you might imagine given its aluminium frame and its largely Kevlar-carbon bodywork. It tips the scales at 1400kg, a few kilos less than the latest 911 Carrera 2. Its 350bhp advantage does wonders for the power-to-weight ratio, though: 501bhp per ton is comfortably ahead of the Carrera GT’s 445, shades the Pagani Zonda F’s 497 and is not so very far adrift of the Veyron’s 521. Ruf claims 0-62mph in 3.2sec and, even more impressively, 0-124mph in 9.6sec. Meanwhile, the combination of monster 15in cross-drilled carbon-ceramic disc brakes with six-pot calipers and acres of Michelin Pilot Sport rubber (335/30 ZR20s at the back) should  throw all that g-force back onto the chest strap of the seat belt with interest.

Naturally, the CTR3’s cabin is similar to a 911’s: a lower, cosier and slightly more intimate version. The leather-trimmed carbon bucket seat is a reassuringly snug fit, the small, entirely round and ungimmicky steering wheel good to grasp. I twist the ignition key and the engine coughs into life with little drama; certainly none of the shrieking histrionics you get with a modern Ferrari or Lambo. At idle, the gearbox rattles its straight-cut cogs, and as I ease away in first (progressive clutch, not too heavy) it underscores the gruff blare of the massively potent flat six with a mildly irritating serrated whine. What soon becomes starkly apparent, though, is that the slowest thing about the Ruf is its gearchange, which simply refuses to be hurried. What happens between shifts, however, is mind-blowing.

Although not made out of gossamer, the CTR3 is light. The hammer that’s about to propel it towards the horizon is heavy. Result? Surprisingly, not the kind of immediately unsettling acceleration that might put me in danger of swallowing my tongue. There’s no hype, no electronically enhanced throttle response, no haymaker to the kidneys. Just a push that builds with the relentless intensity of an avalanche. Rushing to 60mph isn’t what interests the CTR3. The exercise is too trivial, too undemanding. Rather, as with the Veyron, the interesting stuff happens between 100 and 200mph. That’s the zone that separates the true hardware from chip-tweaked pretension, the zone where the Ruf hits its natural stride. The sustained, broadband ferocity of the acceleration is something you don’t get used to in a morning behind the wheel.

Towering as the Ruf’s performance undoubtedly is, its chassis is simply exquisite. The roads around Pfaffenhausen are almost laughably smooth but they’re challengingly twisty nonetheless. They’d be challenging in a 911 at any rate. In the CTR3 they’re dismissed. Period. Body roll is almost non-existent, the helm’s natural sense of flow and precision a swift confidence-builder. The firm springs and expansive rubber don’t exact too harsh a penalty on ride comfort, either – at least not in the light of the truly stupendous grip, traction and stability on offer. There’s no edginess. Kill the power mid-bend and the tail stays nailed to the tarmac. The brakes’ power and resistance to fade is just as 911-eclipsingly phenomenal. As the roads open up, the CTR3 feels as if would pull well over 1g in longer turns, and teasing up the torque in the sharper ones it’s easy enough to edge the tail out of line and collect it with a jab of corrective lock.

The CTR3 is a car you instinctively trust. It makes fast easy in the same way that a Boxster or Cayman does, stripping away the cause-and-effect concerns that would haunt the nine-tenths 911 pilot. It’s gun-it-and-go raised to a supernatural level. Momentum and mass seem perfectly synchronised, the car’s potential feels uncannily accessible; there’s a tremendous sense of precision and immediacy in everything is does and a wonderful, exploitable balance.

Bottom line. The CTR3 is comfortably the finest Ruf to date. It’s also by far and away the best 911 Porsche never made.