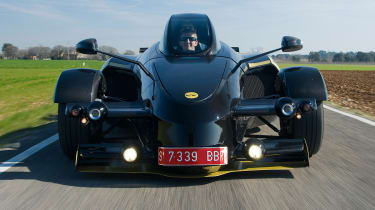 Josep Rubau never wanted to build a sports car for everyone, he didn’t want just another generic supercar project with a smattering of Ferrari at the front and Lambo at the rear. The Royal College of Art graduate set out to make a statement, to build a car that would sell to just a few people a year. With the Tramontana R, you’d probably say it’s mission accomplished.

As we screamed at serious speed along a quiet Spanish country road with the full, buzzing fury of a 5.5-litre, 720bhp Mercedes twin-turbo V12 just inches away, the appeal of his creation hit home. Get past the oddball looks and the Tramontana R calls to mind another small-volume hypercar, the Pagani Zonda.

When it’s given its head, the R is truly ferocious. Its unique layout only adds to the sensation of pure speed: sitting high over the nose, it feels like a 200mph, warm, dry motorcycle ride. Add the intoxicating note of the engine, steering so direct it feels like an extension of your limbs and every piece of racing tech that could reasonably cross over and you have a recipe for something quite extraordinary. This is the second time I have approached the Tramontana, both times with trepidation; both times I have emerged laughing like a maniac.

Rubau set up shop in the grounds of a rural farm just outside Girona and unleashed the oddball Tramontana on an unsuspecting world in 2005. In original open-top form it called to mind an F1 car, albeit a long, fat one. At almost five metres it’s mighty long, bigger than the pictures could ever suggest, and you have to use the 20in wheels to get a handle on the scale.

And now there’s this hard-top version, which Rubau believes is better suited to hotter climes and everyday use. There’s no getting round the fact that a Formula 1 body and fighter-jet cockpit make about as much visual sense as one of local boy Salvador Dali’s finest. The end result looks part racing car, part Eurofighter and part mechanised insect thanks to that sloping back and the two antenna-style mirrors. A conventional beauty it is not.

But underneath the challenging exterior is a wealth of engineering depth, from the carbonfibre chassis with its F1 levels of torsional rigidity and safety cell through to the fully adjustable Ohlins horizontal dampers with external reservoirs that look so good when you lift the bonnet. Then there are the Dymag wheels with carbon rims and magnesium cores, and the inline seats that keep the weight over the centre line. Things get even more obsessive under the skin, with silver wiring and gold componentry. Go for the diamond-encrusted interior on the options list and it will take the 385,000 Euro starting price up towards a cool million…

The centre of gravity lies beneath the rear passenger seat, so it won’t affect the car if there’s one on board or two. Just a word of warning: if you take a passenger they had better be a close friend as rubbing legs is a standard part of the Tramontana experience.

I had engineer Jordi for company as I lowered myself into the other-worldly cockpit and got acquainted with the controls. An LCD screen contains the vital information, and there’s a gearlever shaped like a jet’s joystick. It’s a sequential shift, attached to a six-speed Cima ’box with a clutch (there’s a semi-automatic paddleshift on offer, too). I would, however, lose the show-orientated steering wheel and take the plain round one, as grabbing fresh air mid-corner could be seriously uncool…

Pulling the canopy shut with a dull thud, a firm shove on the lever through a central point of resistance and we’re away, accompanied by the chirrup of the turbos. They run 1.4 bar of boost and apart from the noise and the low-down torque they’re inconspicuous, but then we haven’t engaged the full works yet. In a nod to everyday usability, this car has a BMW M-style sanity mode. For the run to the office, the R can be pinned at a relatively safe 550bhp – until you push a button and let all hell break loose.

The thrust in the back in full-bore mode is insane, and keeps coming from 1500 revs all the way to the 6000rpm redline. Then the next gear brings a similarly insane surge of acceleration that’s just as savage, just as ferocious, while the turbos whistling away inches from your ears give the whole car an aura of brutality.

The factory crew have recorded 0-62mph in 3.6sec and 125mph in 10.15. The top speed is electronically limited to 201mph. Rubau could have squeezed more power from the R, and he will, but everything comes in stages. So it keeps the same 720bhp headline figure as the ‘standard’ Tramontana but with fewer revs – peak power comes at just 5000rpm as the Spaniard likes low- end torque. Certainly 811lb ft gives the four-stage traction control plenty to think about.

With 250kg of downforce there’s more grip than anyone could reasonably break on a public road. In fact the cornering speeds belong in high-end motorsport with lateral grip of 1.22g on standard tyres, much more on slicks. It’s not a car to slide round bends at heroic angles, more a precision machine built for ludicrous speed and minimised inputs. Indeed the chassis only really comes alive at speed, when the car gets up on its toes, suddenly feeling alert and instantly reactive. It’s not perfect, though. At speed it’s sensitive to cross-winds, taking constant micro corrections to keep the car in a straight line on a blustery day, the whole thing alive in your hands.

The brakes, 380mm ceramic discs with six-piston calipers all round, haul the car down from triple-digit speeds with awesome authority. The 100-0kph time of 2.5sec is one of the more memorable statistics, though nothing prepares you for the sheer violence of the procedure.

Tramontana may have honed their car on the race track – and they will even lay on a full test team for customers who want to drive their car flat out on a circuit – but it is, first and foremost, a road car. That’s why it comes with the canopy, full climate control, comfortable leather trim, plush carpet and a real sound system. It can even raise itself hydraulically by 135mm to prevent expensive scrapes over speed-bumps and cope with potholes and other obstacles. None of this helps the weight, of course. Although the R is 98kg lighter than the original, it still tips the scales at 1268kg without fluids.

It’s an automotive oddball, one so exclusive it makes the Zondas and Veyrons of this world seem almost common. This is unit number 10, and Rubau has set an absolute limit of 12 cars per year. They are for men who already have a Zonda and Veyron in the garage, and want to stand out from their peers in extravagant style.

Rubau says he wanted a unique car, one that not everyone would understand, and his exclusive clientele are not just buying a car, they’re buying a piece of art that they often sit and enjoy in the privacy of their climate controlled garage with the aid of studio lighting, a plinth, a fine Cognac and a cigar. As you do…