Based on the Mercedes SL65 AMG, the 753bhp C25 is Carlsson's carbon bodied supercar 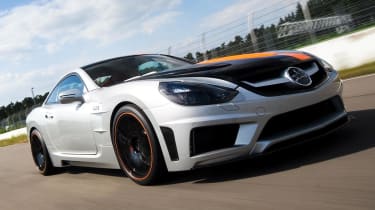 Automotive haute couture. Based on the Mercedes SL65, Carlsson will make just 25 C25s (if they can find that many buyers), and sell just one car per country. So as well as being Carlsson’s biggest, fastest, most powerful car, it is also absolutely exclusive. For some that’s worth the €430,000 price of entry, plus local taxes of course.

The engine is a beast, with 750bhp and torque that’s electronically limited to 850lb ft for the sake of the transmission. Most of the base work comes from Mercedes, with Carlsson squeezing the extra power out with an ECU, intake and exhaust upgrade.

Just as impressive is the carbon fibre skin, which goes a long way to justifying the price. The folding hard top is gone and all the panels have been redesigned, stripping out 100kg and helping transform the car’s handling.

The suspension features Carlsson’s C-Tronic adjustment system. It hunkers down on the racetrack, but on rougher roads the suspension lifts 30mm to smooth out the ride.

It’s quick, that goes without saying, but it’s far from overpowering. It breaks through 60mph in 3.7secs and will head to the dark side of 220mph before it runs out of steam.

Carlsson deliberately opted for a civilized ride and a muted exhaust. The end result resists roll admirably and sticks to the bends.

Think of it as a competitor for the Bentley Arnage or a tarted up Panamera rather than an out-and-out sportscar. It’s an everyday car with an awesome lick of speed for the money-no-object crowd who never want to turn up to a society party in the same automotive dress as their friends.

They also focused on the interior, which is done up to top manufacturer standards and beyond with tailored buffalo hide and ultra suede.