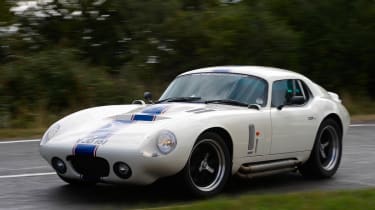 Look at it. Just look at it, and tell me you don’t want this Superformance Shelby Daytona Cobra Coupe. Blessed with the best rear end since Kylie pulled on a pair of gold lamé shorts, there’s nothing you can do but gawp in admiration at the genius of Peter Brock, designer of the original ’60s race car – and this magnificent modern recreation.

Built by South African company Hi-Tech Automotive, imported to the UK by Nigel Hulme’s Le Mans Coupes Ltd and sold by long-time Cobra experts Rod Leach’s Nostalgia, this is the MkII version of the car we last featured back in evo 097. Don’t worry, the same light weight, heavy-hitting recipe remains, only it now has a little extra civility and greater interior space.

It would take a brave man to suggest the original Daytona Cobra’s shape needed improvement, but if anyone’s entitled to give it a tweak it’s Brock himself. To this end he’s increased the overall dimensions by approximately two per cent, primarily in order to win a little more head and shoulder room in the cockpit, and also to gain some extra visibility. He’s also changed the nose a little.

There have been hardware changes too, most notably the adoption of Chevrolet V8s in place of Ford V8s. The new GM motors are lighter and very potent, with power rising from 437bhp in ‘baby’ LS3 spec (as tested) to a faintly terrifying 650bhp-plus in supercharged LS3 and LS9 specs. Suffice to say the light (sub-1300kg with a full tank of fuel) and slippery-shaped Daytona is a monstrously quick machine, capable of hitting 60mph in sub-4sec, 100mph in sub-9sec and, given the space and courage, a top speed of 200mph, just like the race car did in the mid-’60s.

Bob Negstad, the chassis engineer who designed the original car’s underpinnings, also worked on the first Superformance project. Like Brock, he has made changes to this MkII version. New suspension geometry has allowed for easier camber, castor and toe adjustment as well as the fitment of more authentic deep-dish alloy wheels. The structure is more rigid, road noise has been reduced and a new ZF limited-slip differential has been adopted. It’s a thorough job.

After the timeless glory of the exterior, the equally authentic interior is something of a culture shock. It’s perfectly habitable – it has air-conditioning, electric windows and a potent stereo – and the toggle switches have undoubted period charm, but like any low-volume, hand-built car, the Daytona tests your resolve, simply because by any conventional modern benchmark its interior falls short of the mass-produced fit and finish we’ve all become used to. The dilemma for Superformance is this: if the car was utterly race-raw and stripped of any concession to comfort it would be easier to manufacture, but completely impractical and doubtless pretty horrid to live with.

And that would be a great shame, for once you settle into life with the Shelby Daytona, you discover it really is a very special car. Yes, it has the ability to test your patience from time to time, but it has such a big heart and generous nature it’s impossible not to love it.

Like any self-respecting American V8, the LS3 fitted to this version of the Shelby has the ability to be mellow one minute, malevolent the next. You can shuffle through the six rangy gears, relying on the high-torque, low-mass combination to draw you along with minimal effort and a lovely simmering rumble. Or you can kick into the long-travel throttle, frighten yourself rigid and make a right old rumpus.

The Shelby is shockingly quick when roused. Floor the throttle in any of the first three gears and it yelps forwards, straining at – but never quite breaching – the limits of traction, at least if it’s dry. Such is the total transfer of torque from tyres to tarmac you can almost sense the road rucking up beneath the fat rear wheels. In fourth it’ll still lift its nose, but such is the reach of this and the last two gears that it takes longer to hit its Usain Bolt-like stride, by which time you’re travelling at such a rate prudence dictates that you daren’t continue the headlong rush for the horizon.

The clutch, brakes and gearshift all share the same honed, heavy-duty feel. You need muscle to operate this piece of machinery, but it’s satisfying graft, thanks mainly to the feel of the blueprinted Tremec gearbox. Once you’ve sussed the bite-point of the clutch it’s actually a rather friendly car to drive, even through central London, although commuting would surely see your left calf muscle swollen to the size of Popeye’s forearm in a matter of weeks.

Once on the move you don’t actually need to change gear that often: a block shift from second to fourth will cover most eventualities, from Hanger Lane to the Hangar Straight. Still, there’s something truly addictive about stirring the Shelby’s artfully kinked lever through the gate, and you’ll find yourself playing all sorts of tunes on the pedals, just to elicit the fruitiest possible rasp and overrun cackle from the booming sidepipes. If you love the technique of driving as it used to be, you’ll find great satisfaction in the Shelby.

Shame then that the steering doesn’t share the weight and tactility of the other major controls. The power steering is light and quick-witted, so even at low speed you need to be measured in your inputs, but it’s at high-speed that you need to be at your calmest. Far from being a big ugly brute that you can grab hold of and chuck around, the Shelby demands precision and calm control to guide smoothly. You only need to think it through fast kinks with the slightest input, while ‘recreational’ cornering demands a similarly unruffled style if you’re to avoid over-steering while oversteering.

Superformance and Nigel Hulme are aware of the need to calm its responses and engineer some weight and feel into the Shelby’s helm. As it stands you need to be confident – and able to draw your information from other aspects of the car’s behaviour – rather than relying solely on what you’re feeling, or not feeling, through the rim of the Moto-Lita wheel.

There’s no traction control, nor ABS for that matter. That’s not the challenge it sounds, for there’s plenty of traction (even in the wet, so long as you’re in a straight line), while the brakes have power and progression, so you can brake hard without fear of locking them up. Of course, knowing it is possible to lock-up the brakes or spin-up the rear tyres does wonders for your driving, as it makes you considered at all times and extra cautious in poor conditions. That’s how it should be whatever you drive, of course, but our growing reliance on modern safety systems makes you feel a bit exposed in the Shelby, although only for as long as it takes you to discover it’s actually on your side if you pay it the requisite respect.

So, does the Daytona Cobra live up to its stunning looks? As much as anything blessed with such freakish beauty can. Yes, it has flaws, but as the miles pass you find your growing fondness for its abundant strengths make it easier to accept and forgive its weaknesses. It’s the antithesis of the sometimes sterile modern high-performance driving experience.