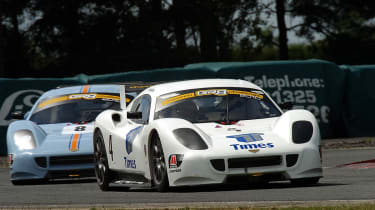 Attaching a badge made famous years earlier to a new car is a brave, even risky thing to do. Brave because buyers might not make the connection in the way you want, risky because your new car might not live up to the reputation. Even worse, you might discover people don’t actually care…

Between 1965 and ’78, a small cottage industry in Bolton led by the shy but ambitious Derek Bennett turned out around 1000 Chevron race cars, including some of the most beautiful sports GTs the world has ever seen – step forward B8 and B16. You can still buy

one of these today, as a ‘continuation’ car, accurate in every tiny detail. The car you see here, though, is the Chevron GR8, and though there is definitely some Chevron DNA in there, it’s a new model.

The new car is the work of Chevron Racing Cars Limited. Formed by Vin Malkie, who worked at the original factory in the 1960s, and his wife Helen, Chevron Racing Cars is one of the concerns able to build continuation models and supply parts for all the Chevrons still out there and still racing. The GR8 (that’s Gran Rapido, rather than Gran Turismo) was Helen’s idea, and it harks back to the glory days but adds modern aerodynamics and motive parts.

The shape is by Lester Allen, whose CV includes Bentley Continental R and Aston Virage. His brief was to remind people of the B8 but to add a wing, a splitter and bigger wheels without making them look ‘stuck on’. The glassfibre body is draped over a traditional, massively strong steel-tube frame with wishbone suspension. Power is by a four-cylinder Ford unit, just like the B16. In this case it’s a modern 2-litre Cosworth Duratec poking out 255bhp and driving through a five-speed sequential Hewland transaxle. The rest of the car is off-the-shelf racing stuff – AP brakes, 18in SL Corse wheels, big Toyo tyres.

Inside, accommodation is basic and there’s a lot of bare glassfibre and tubes. The doors are only a rudimentary fit and there’s no heater, air-con, or electric anything – apart from the need-to-know dash. But this is a nicely made, proper GT race car with a wailing 2-litre engine, a shrieking, clattering dog ’box, brakes that can send your eyes out on stops and grip that has your neck aching.

I raced the car at Croft in Chevron’s own one-make series, and it was a wonderful, sweaty, bruising experience. Gratifying, too. The car is sensitive to everything – set-up, momentum, driver input – but it feels as if it could go on until it runs out of petrol, or the driver runs out of energy. And like all good GTs, it left me with the sense that every corner, every lap, if I could just put everything together that little bit better, it would respond simply by going faster. That’s not to say it is easy, but that’s part of the challenge. The GR8 is up for it, as long as you are.

There’s a lot of stuff you can do with a car like this: trackdays (although you’ll lap the whole field every five minutes), the Britcar endurance series, Castle Combe GTs, British GTs (with a few tweaks), plus a few more. And it’s not mad money – you get a proper, turnkey race car for under £50K (plus VAT). A lot of those people who pound round at trackdays in their GT3s might do well to realise they could go so much faster for so much less. And as going fast on the road becomes harder by the day, a bigger bang for your circuit buck becomes a more compelling notion.