Mechanically simple and hugely quick, the new Marcos coupe could take over from where TVR has left off 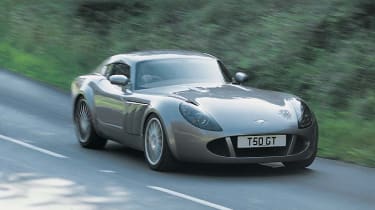 A while back, Jethro Bovingdon introduced the Marcos TSO R/T roadster as 'one of those cars that you desperately want to drive...' This was because it had a big engine up front driving the rear wheels and it was light and simple. He was right on the money, of course, and I doubt you'll find an enthusiast anywhere to disagree. But the fact that he said it at all implies the breed is becoming rarer. The key words are 'light' and 'simple'- which rather rules out the biggest Astons, Ferraris and Mercedes - and then if you factor in the phrase 'for less than fifty grand' you have even less choice. When I last flicked through the back pages, there was the Marcos and the left-hand-drive-only Corvette and Viper and that was about it. TVRs are still very much around but they don't have a really big engine and they aren't really all that simple any more.

Whether £50,000 constitutes 'affordable' is another matter, but into the category comes a second contender from Marcos, the TSO GT2. New company owner Tony Stelliga and his band of stylists and engineers currently enjoying asylum from TVR, Noble and Aston Martin have taken the basic tube-frame chassis of the convertible TSO and added new fixed-head bodywork, changed the suspension, steering and gearbox and upped the power of the 5.7-litre Corvette V8 to make a neat GT. They had a bit of help from their landlords at Prodrive who were given a careful brief for the chassis and suspension, and this might be a smart move on Stelliga's part. It won't have been cheap but Prodrive's expertise takes out the trial and error and gets the car ready more quickly, as well as perhaps proving a key factor in the way the car turns out.

The Chevrolet V8 is another essential feature. The basic design is over 50 years old and more than 90 million have been made. The latest, although true to the original pushrod, two-valve specification, is a very different all-aluminium animal with a cam higher in the block, shorter pushrods, different combustion chambers and piston design and, of course, fully mapped management including one coil per cylinder. As one engineer put it, GM has spent millions making sure it complies with worldwide emissions legislation but at the same time it has taken everything that the tuners have done over the years and incorporated the best bits.

The latest GM V8s are also the biggest to date and if 400 is still not a great many horses from six litres it is a lot to have under your right foot. While there is still no legislation against engine size, more swept volume is the easiest way to bigger grunt, if not fuel economy. Additionally, the simple layout of a 90-deg vee and a cam in the block rather than a pair on top of the heads makes for a very compact engine that fits beneath a lowline bonnet without smacking the sump on the ground. A large displacement also leaves room for people to fiddle in search of more power without a great deal of effort or expense. Marcos has sought outside help for that, too, and so far they have realised 475bhp within full European emissions criteria.

Prodrive's brief was to make the car accessible to everybody, and that meant making all the controls (steering, clutch, brakes) easy to use as well as keeping everything friendly when someone oversteps the mark - or, in Prodrive-speak, 'benign post-limit chassis behaviour...' In obvious pursuit of that was the choice of 215-section tyres on the front and 235 on the rear. The Marcos engineers have managed to keep weight down to just 1070kg so a tyre section that might seem narrow for the average hatch is big enough to fulfil the brief.

The TSO GT2 looks smaller and neater in the fibre than the pictures and the cabin smaller still, relative to the rest of the body. Despite that, there's adequate if not ample room inside and although the shallow screen creates an initial sense of tunnel vision, that disappears as soon as you focus on the road ahead. First impressions are a strange mixture, given the surroundings. The steering is light but accurate and has a restful feel to it. That's not to say it's slow but that the car responds in a measured manner, however fast you move the wheel, and the front end goes exactly where you aim it but with just enough reassuring push to make you feel relaxed.

As for the back, well, that's up to you. It will track obediently behind the front, gently yawing and lolling to whichever side until you ask it to do otherwise. That is just a simple matter of planting the right foot - any of the lower gears will do - and the tail sways lazily wide, inviting you to hold it there in a cloud of tyre smoke, casually balancing lock with a flex of the wrist while the Chevy motor bangs and pops against the rev limiter.

The benign bit, though, is better proven by the fact that chucking the car into a corner and backing off suddenly won't immediately spit you into the nearest ditch. Some of this is down to the way the car progressively gives up grip, but added to that is long-travel, compliant suspension with subtle damping control that gives you plenty of warning as well as a great sense of involvement. You move the wheel and you feel the response through your backside like you do in an old E-type.

It's a novel if risky approach but one we should applaud because too many cars these days are so stiff and have so much grip that not only do they exclude the driver most of the time but the limit arrives very suddenly. Marcos and Prodrive's strategy is especially welcome for public roads but the risky bit is that on a track, sudden changes of direction need to be tackled with common sense. The body leans in direct proportion to the steering, so even if damping control is firm but gentle, rough handling of the wheel can accelerate the movement from one side to the other, enough to cause a problem. A bit like Not Backing Off in an early 911. Once you know that, though, you can drive round it while enjoying other attributes.

The brakes meanwhile also reveal the hand of Prodrive. The pedal moves a lot further than you expect, but the modulation is entirely consistent; in other words, it needs movement as well as pressure to increase braking effort and that makes it easy to brake smoothly.

The engine is predictably lazy, but is absolutely, definitely, musclebound. This one is in 475bhp form (soon to be increased when the first 6-litre LS2 units arrive) but it will pull from nothing in any gear, an ability that creates a sense of enormous power but with no special knowledge or experience necessary either to access or control it. In fact, that goes for pretty much everything about the Marcos, with the exception of the shift for the Tremec six-speed transmission. That is short and precise and satisfyingly clonky, but the synchros are relentlessly tough and the shift quite slow.

The engine installation isn't quite as smooth and refined as you might expect at the top end either, but it's very easy to forget just how shatteringly quick 475bhp in 1100kg can be. The numbers won't tell the whole story - the rear tyres are probably not wide enough for ultimate sprint traction and I'd be surprised if it gets to 60 or 100mph as quickly as some rear-engined cars with less power - but we're told that 50-70mph takes about two seconds. That's SLR McLaren territory and accompanied by a similarly subdued V8 waffle from behind.

Not only is the Marcos a car that you desperately want to drive, it's a car that desperately wants to be liked. That may make it a little too willing and friendly for some, but as a different take on a well-tried formula it represents a welcome breath of fresh air in a very small market place. That, we should remember, was true of the ground-breaking TVR Griffith, which also tried to maintain ride quality and a big boot while going faster than anything else at the price. TVR has since taken a different direction, so if Stelliga and co really can keep the TSO GT2's price below £50K, there won't be much else like it.