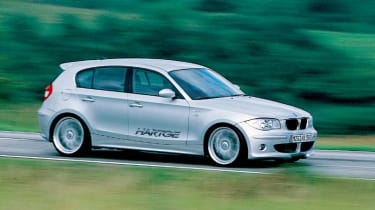 You've gotta love the Germans. Despite being regularly lampooned by British tabloids for their humourless approach to life, these guys are serious comedians. Take Hartge GmbH for example. Its factory is one of the most impressive anywhere, with the ambience of an F1 engineering facility: spacious, spotless and with high ceilings that let in lots of light - more operating theatre than automotive production line. And then Hartge goes and builds this, the fastest, maddest, most expensive 1-series the world has yet seen.

It's called the H1 V8 5.0, which signifies that under the bonnet lies the muscle of the previous- generation M5 (the E39). In other words, it's a tiny car powered by a monster V8 motor. And the fun doesn't stop there because Hartge felt the standard M5 engine wasn't quite up to the task, so the engineers fitted wilder cams and reworked the head to unleash 450bhp and 376lb ft of torque - I told you these boys were crazy.

Crazy, but not stupid, for pretty much the whole car has been reworked. Hartge specialises in transplanting big hearts into unsuspecting compact bodyshells and knows just how much extra general strengthening has to be added so that the car doesn't fold up like a paper cup. The gearbox is the M5's manual six-speeder, but with a shortened M5 propshaft feeding drive to a modified M3 variable-locking M diff. There's a new, strengthened rear subframe and the suspension has been replaced with Hartge's own sport kit, which is 30mm lower than normal, fully adjustable and incorporates uprated anti-roll bars. Finishing the job is a set of 19in polished Hartge wheels, which at the front expose massive eight-piston callipers and 380mm drilled discs.

However, all that work was nothing compared with the effort that went into accommodating that massive lump of an engine. First there were the mods to the engine bay itself and the relocation of many of the ancillaries (the sump had to be reversed, too); then there was the matter of the steering column, which could no longer follow its normal path. And then there was the ECU. PR boss J