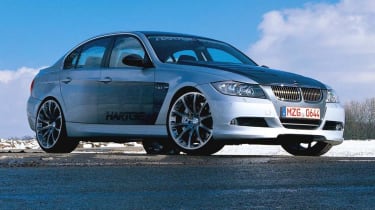 For a Hartge owner, life must be one constant giggle. Picture the autobahn scene: ahead you spy a 911 whose driver has just caught sight of your tidy-looking BMW saloon gaining on him in his rear view mirror. You know exactly what's about to ensue because it's happened countless times before. Herr Porsche feels duty-bound to demonstrate the superiority of the car he thinks you should aspire to, so he drops a couple of cogs and opens the taps. Now imagine his crestfallen, open-mouthed gape when your unassuming BMW simply powers past him like he'd hit reverse...

For 35 years, Hartge GmbH has been mis-matching BMW hardware, squeezing oversized, range-topping engines into small saloons and coupes. Its creations are never anything short of spectacular, yet usually come wrapped in subtle bodies ready to scare unsuspecting, self-assured supercar drivers. But not any more. Few cars have ever oozed menace like the H50. It's almost cartoon-like, bursting at the seams like a steroid-filled body-builder. Just look at that raised, heavily vented bonnet, the slashed wings, the four fat pipes, the oh-so-low suspension and those enormous 21in wheels. Stealth, it seems, is off the menu.

The car you see here was once an unassuming 330i. Now, one major transplant and extreme makeover later, its heart beats with four extra cylinders. Crammed into the engine bay is the extraordinary 5-litre V10 unit that usually powers the M5 and M6. Now this may sound crazy, but fitting a standard engine with 'just' 500bhp was never going to be enough for Hartge, so they reworked the cylinder heads, modified the butterflies, fitted new camshafts and remapped the ECU. Hitting the 'Power' button now unleashes grunt of colossal proportions, 550bhp and 384lb ft of torque, armed and ready to fire this 1670kg machine headlong at the horizon.

Or at least it will soon. You see, it has taken longer than expected for Hartge MD Volker Schu and his team to match the M5's electrical systems to the E90 3-series' loom. Schu had hoped the electrical work would have been one of the more simple tasks within the project, but it has become one of the biggest hurdles they have had to overcome. For our test today - arranged a few weeks ago to allow evo to be first behind the wheel - the big guns have been disarmed. The hyperdrive Power button is out of bounds, so somewhat disappointingly we only have a mere 400bhp to play with.

'It was a surprise to us,' explained Schu, 'that two cars produced at the same time should be so different. It's almost as though we have taken the engine from a different manufacturer. We have had the engine running at full power, but have had to disconnect it again to work on other systems such as the DSC traction control and the onboard computer. It's very nearly there, though, so we will be ready to build the first customer cars in April.'

Thus far the project has taken around 12 weeks, beginning with two complete cars - the 3-series and an M5. In future, Hartge will simply buy-in the V10 engine and other required M5 parts, but to understand how to mate these two machines, two whole cars was the logical starting point. The engineers have had to fathom out the conversion in stages, the first of which was simply to get the massive motor and the SMG gearbox to fit in a space never designed to swallow something so large. The steering rack required a little modification, and new homes had to be found for all the ancillaries, but as it turned out this was all kids' stuff compared with sorting out the massively complicated electrical system BMW employs for the M5.

At the rear, the M5 propshaft and M differential both had to be shortened to fit 3-series dimensions. The axle ratio was altered to match, with stronger link-arm bearings and (fully adjustable) multi-link arms to prevent it all ripping itself apart.

To stop the H50 spitting you off the road, new springs and dampers were developed in conjunction with Bilstein, with increased front spring rates to cope with the extra weight of the V10. The H50 currently sits a full 30mm lower than the 330i, although the final set-up won't be perfected until the N