The 'traditional' Westfield gets a makeover. This one's a bit rapid, too 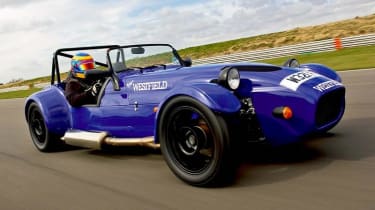 You certainly can't accuse Westfield of not listening to its customers. The company reintroduced the Eleven in response to a stream of requests and now it has updated its SEi wide-body range after customers asked for something new. Moves by anyone to update the traditional 'Seven' look have been a long time coming; indeed Caterham may have missed a trick with the radical new CSR by making it look so similar to every other Seven. Of course, if you can remember the unloved S4 Lotus (a misguided attempt to update the Seven in the early '70s) then you will probably understand the reticence, but if you're under 40 and contemplating paying similar money to an M3, then you might be forgiven for expecting some modern design. Upside-down caravan light clusters are not really the done thing. Westfield's styling has never been quite as conventional as Caterham's, and using GRP rather than aluminium allows greater shape freedom, but it's obvious that a great deal of effort has gone into the new lines, which look both neat and aggressive. The nose-cone and bonnet are now all one piece, hinging forward from the base of the nose. This not only removes the usual shut-line, it also allows the large 'nostril' engine vents to be moved forward, making them more effective at engine cooling. The nose is slightly pinched too, giving the impression that the car is slimmer though the only change underneath is the fitment of a less bulky air filter. The rear has also been reworked. Gone is the squared-off tail, replaced by new curves, new lights and a square number-plate holder, all topped off with a small lip spoiler that's bound to get the purists in a bit of a tizz. The new look, which is similar to that of the short-lived carbon-bodied FW400 of 1999, doesn't replace the old. That's still the standard fitment and you could even specify the new nose with the old rear. Cars fitted with the new body will have the 'FW' (for feather-weight) tag added to their name as a nod to the past and recognition that it is lighter than the standard body. It costs £450 extra. This particular model is the £32,950 range-topping Sport 2000S FW with a 250bhp Dunnell-tuned motor and a six-speed sequential 'box, but the new body can be fitted to any of Westfield's wide-bodied cars, including the new entry-level 1.6-litre Ford Zetec model. It can also be retro-fitted to existing cars. Westfield hasn't made any claims about the new shape being more aerodynamically efficient; it was designed to be aesthetically right and it hasn't been anywhere near a wind tunnel, but I had no problem accelerating hard all the way through sixth gear down the long Revitt Straight at Snetterton. At the end of this long run it's not unusual to hit a wall of air above 110mph but that wasn't evident here, although to be honest the sledgehammer of an engine certainly helps its cause. High-speed understeer is another common trait with this type of sports car, as they tend to induce small amounts of front-end lift, but again the Sport 2000S feels more comprehensively tied down. In fact, with sticky Toyo Proxes R888s, it's quite a physical car to drive. After 20 minutes or so you can feel the effort in your forearms. It's worth it though, especially if you want to be driving one of the fastest cars on any given trackday. The sequential Elite gearbox works brilliantly on track, allowing clutchless upshifts and easy downshifts, while everything is brought to an abrupt stop by AP Racing brakes with four-pot callipers. As a cheaper, track-focused alternative to the Caterham CSR, the new Westfield Sport 2000S makes a very strong case for itself.