How many Porsche 911s did they make last week? Have you any idea? Well, I'll tell you. Five hundred, give or take a few. How many SVs did MG manufacture last week? Two. Yes, you read that correctly. A brace. A pair. A Ying and a Yang. That is an extraordinarily low production rate for a modern motor car: whatever their other qualities, the MG SV and SV-R are machines of unparalleled exclusivity. The only comparable manufacturing sluggishness I can recall from my own experience is that of Aston Martin in the 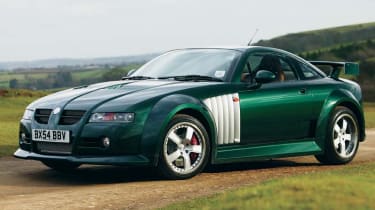 How many Porsche 911s did they make last week? Have you any idea? Well, I'll tell you. Five hundred, give or take a few. How many SVs did MG manufacture last week? Two. Yes, you read that correctly. A brace. A pair. A Ying and a Yang. That is an extraordinarily low production rate for a modern motor car: whatever their other qualities, the MG SV and SV-R are machines of unparalleled exclusivity. The only comparable manufacturing sluggishness I can recall from my own experience is that of Aston Martin in the 1980s. In fact, the Aston Martin production rate was greater than that of MG at present, although MG plans to jack up its production to the same giddy rate of four a week.

Rarity is not the only quality shared by the '80s Aston V8 and the MG SV-R. They are both two-door coupes with throbbling 5-litre V8s driving the rear wheels through five-speed gearboxes. The SV-R's service intervals are an '80s-style 5000 miles. There is a real bespoke service with the MG: although a wide range of interior and exterior colours are offered, if you pay a little extra you can have whatever you want. Like AM of old, the owner's manual is a delightfully small and simple device, about the size of one of those little ring-bound notepads you can get from WHSmith, a welcome contrast to the Tolstoy-esque tomes that the buyers of premium motor cars these days have to try to shoehorn into their airbag-constricted glove boxes. (How appropriate that glove boxes have finally reached the size that only a pair of gloves will fit.)

There is a real sense of enthusiasm and commitment to the SV project amongst those who work at the MG X-Power base in Longbridge: bright people who are determined to make the best of paltry development and marketing budgets. This was Aston Martin of old, a contrast to the Aston Martin of new, whose Gaydon facility has that slightly stifling corporate atmosphere of a muscular modern manufacturer, where a branded overcoat has to be worn by every visitor to the production line and every internal door is opened by a swipe card. The feel at MG may be antiquated, almost amateur by comparison, but there's no doubt that it's a lot friendlier.

Of course, a memorable aspect of buying Aston Martins in the '80s was your unexpected role of unpaid development driver. Lack of development funds meant that the cars were never what you might call 'production ready' and the company relied on owners to tell them what went wrong and when. It was a role that personally I quite enjoyed but many buyers thought that the stratospheric price they had paid for the car might have excused them from those duties. Sad, deluded people.

Indeed, the price of this SV-R appears comparably preposterous to the old hand-built Astons. Would MG sell many more if they made it cheaper? I don't think so. When Honda suddenly dropped the price of its equivalent 'halo' model, the NSX, by £10,000, I don't think it had the slightest effect on sales. MG may as well keep the cost high and derive a bit of cachet from the SV-R's exalted price level. What's the point of seeking price equivalence to a 911 when the Porsche will always objectively be the better car?

Anyway, this MG is not, in a sense, intended to sell. It is a loss line to promote the MG brand and the 'selling' exercise can only be about managing the loss, not maximising the profit. As such, it's probably doing rather a good job, if you ignore the fact that the exotic image of the SV-R is not strictly in keeping with the 'brand values'. MG is almost unique as a long-established sports car brand in never having been associated with the unattainable or the exotic. Jaguar, Porsche, Aston Martin, Ferrari, etc, have always been cars you aspire to own 'one day' whereas an MG has been something you might just nip out and buy on the day you pass your test. The cars have traditionally been accessible and affordable, which is not a description easily attached to the SV-R. Perhaps it is intended to be redolent of the one-off record breakers with which the history of MG is peppered, streamlined wonders extracting improbable performance from highly tuned versions of the small production engines. Stirling Moss famously drove EX181, a car that looked like a large sucked sweet, at Bonneville Salt Flats in 1957 and achieved 245mph. With a four-cylinder, 1600cc engine. Extraordinary. But again, the parallel with the SV eludes me.

Collection day at Longbridge was very pleasant and I was handed the keys of this pearlescent British Racing Green example with tan leather. It's a smart car, with paint and trim of very high quality. Dominant issues in the first few days were an irritating wind noise from the passenger door and the crushingly dull rev-limit during running-in. 3000rpm in a car red-lined at 6800? I have an almost religious devotion to running-in, so I stuck to it.

Bar the wind noise, things were going pretty well until one cold morning the car started but stalled during low-speed manoeuvering. It seems to be surprisingly easy to stall, which is odd because a large, torquey engine can usually shuffle a car around without the need to touch the throttle. It restarted but stalled again. It then would not restart at all. I had been warned at MG that one should delay pressing the starter button for five seconds after turning on the ignition, otherwise there is a risk of flooding something or other. Was this what had happened? I left it for several hours to dry out and tried again. No luck. I left it overnight but had no more joy in the morning. The call was made and MG dealer Phoenix Hatfield came out very promptly with a replacement SV-R and took mine away for checks (it had started for them after a lot of churning). I forgot to mention to them a rattle from the front and a whistling wind noise above 60mph. I thought that they were bound to hear these in a 150-mile return journey to Hatfield but the car returned with both faults unaddressed. Back it went. The wind noise was down to a faulty micro-switch controlling the passenger window and the rattle was traced to a heat shield near the gearbox.

All's well now, and I have just returned from a week's work in Cornwall, the car a solid support. One feels surprisingly fresh after five hours at the wheel of the SV-R, the seats not only supportive but comfy. The best things about the car, however, remain the chassis and the steering, which has a lovely feel to it. The chassis is sharp without feeling snappy, taut without riding harshly. The car feels small and intimate: you feel on top of the job. However, the uninitiated should know that the traction control is very hands off: it'll willingly give you enough rope to hang yourself. The worst things? Well, the gearbox always feels like hard work: perhaps it'll ease up with mileage. The clutch is heavy and has far too long a travel. And I have found the aluminium gearknob horribly chilly on cold mornings: one touches the thing as little as possible until it's warmed through. Such knobs are classic triumphs of style over practicality, bits of retro nonsense shared with TVR and Ferrari.

On the return from Cornwall, there started a peculiar graunching, grating noise while accelerating out of a left-hand corner. Not nice.I hope it'll be sorted out this week.