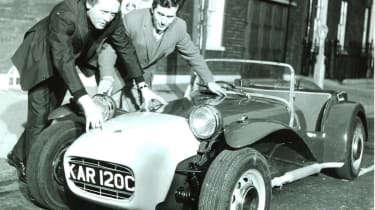 Graham Nearn died peacefully in London on Saturday, October 24, 2009. As the founder of Caterham Cars he was responsible for the survival and continued existence of the Caterham Seven sports car, née Lotus Seven, one of the select handful of truly iconic motor cars. He was the familiar face of Caterham Cars for more than 40 years.

Nearn combined a passion for cars and motoring history with a hard-nosed approach to business, balanced by a capacity for friendly banter, occasional practical jokes and a profound love of family. His definition of family extended to a business family of suppliers and partners to whom he was fiercely loyal and supportive and often a great friend through tough times.

After National Service, Nearn worked in the timber trade before his interest in cars manifested itself in the establishment of Caterham Car Sales and Coachworks in 1959, as one of the original Lotus Centres specialising in selling the road cars manufactured by Colin Chapman's Lotus company as an adjunct to his motor racing interests. The somewhat quirky premises, located behind a petrol station at the top of Caterham Hill, Surrey, were formerly occupied by the motor business of Anthony Crook, then and still of Bristol Cars fame.

Working with his then business partner, David Wakefield, Nearn built a successful enterprise, which was as much a general car sales and repair outfit as a hive of Lotus activity. Dealing with sales and maintenance of the evolving Seven, the Elite, Elan, and Europa but somehow always coming back to focus on the Seven for which Nearn had developed a profound enthusiasm since seeing the first one displayed on the Lotus stand at the London Racing Car Show in 1957.

The Seven evolved through the Series 2 and 3 and eventually changed dramatically into the glass fibre Series 4 variant of 1970. Along the way, the Seven was immortalised in Patrick McGoohan's Prisoner TV series where 'Number 6' drove a Seven - with the registration number KAR 120C, the original number plates of which Nearn had pinned to the wall of his little office at the back of the showroom in Caterham for many years. Nearn himself actually appears in the last episode of The Prisoner, returning the eponymous hero's car to his house in Buckingham Palace Road, and running a duster over it. Lotus had sold the original demonstrator used in earlier episodes and the PR people at Lotus asked Nearn to magic up and deliver a suitably liveried replacement.

By the early 1970s the Seven was beginning to run out of sales steam and an axe was being readied up at the Lotus factory in Hethel. Despite Colin Chapman's resolve to let the Seven die peacefully, Nearn was instrumental in persuading Chapman in 1973 to allow him not only to keep assembling and later manufacturing the car, but to do so officially and with Chapman's blessing, plus a big smile and a well photographed handshake. Most motoring enthusiasts of a certain age will recall Caterham Cars' full page advertisement on the first facing page of every edition of Motor Sport magazine. Nearn was always an astute and creative publicist and used Caterham's meagre budgets and limited resources well to leverage every angle to boost sales. Journalists were always nagging to borrow Sevens for road testing or even racing (if you were lucky) and, from time to time, complete kits were handed to selected scribes who would duly report how easy it was to convert a box of parts to a brilliant road car.

Reverting in 1973 to a production variant of the classic S3 rather than the modernesque S4 helped re-establish waning interest in the Seven. Banned from national sports car racing for being too successful, Nearn was prompted to launch his ‘too fast to race’ campaign. This began his relentless promotion of the Seven in racing and his emphatic ‘you're either with us or against us’ attitude with authorities, suppliers, customers and supporters alike. As time passed the business grew.

Nearn loved motor racing and was proud that many racers, including Graham Hill, Francois Cevert, Jean-Pierre Beltoise and Derek Bell, had started their motor sport careers in Sevens. A passion for motorsport and the momentum of the ‘too fast to race campaign’ prompted the first Caterham one-make championship in 1986. This evolved into one of the most successful one-make racing formulas in the world with some 800 active competitors.

By the mid 1980s, Caterham had evolved into a substantial business with agents around the world and a growing range of specification options and trim variants. Nearn maintained contact with Patrick McGoohan and in 1989, with McGoohan's endorsement, including an appearance on press day on the Caterham stand at the British motor show, he launched a Prisoner special edition Seven with yellow and green livery and a snarling Cosworth engine.

Correctly identifying that involvement in club motor sport and the development of export sales were keys to the long-term survival of a specialist motor manufacturer, Nearn was later particularly proud of Caterham receiving a Queen's Award for Exports in 1993 which gave the small company real world status. The export drive started modestly with Nearn and wife Jane personally taking the first official European export car to Germany overnight on a trailer.

As other manufacturers came and went, Caterham remained robust and continued to grow. His enjoyment of sailing, golf and family life occasionally conflicted with his business commitments, such as the time he went off to play golf one Wednesday lunchtime, forgetting that the then Foreign Secretary, local MP Geoffrey Howe, was due to visit the factory. Howe turned up and went away again but came back another day and was duly photographed beaming at the wheel of a Seven and became an avid supporter. Nearn was active politically and would doorstep voters every four years.

He also helped to found and drive the East Surrey Business Club to promote the interests of enterprise in the region and contributed his time generously to Purley RFC, Round Table and the Rotary Club. As sales expanded the company outgrew the Caterham Hill factory, and by the mid 1980s Nearn decided to redevelop what had become a prime building site, initially retaining part of the new complex as a showroom, but moving a much expanded production facility to Dartford, Kent. With a burgeoning staff and an increasingly complex international business, Nearn progressively passed over operational control to a new generation management team led by his son Simon and assumed the figurehead role as Chairman.

The car continued developing and evolving, setting production car lap records at the Nürburgring with son Robert and breaking acceleration records in collaboration with F1 racer Jonathan Palmer. Having steered the Seven through legislative, economic and marketing challenges for more than 40 years, Nearn, with his sons Robert and Simon, daughters Nina and Eliza, and his wife Jane, all of whom had at times been active in the business, sold the company in 2005.

Today, Caterham Cars continues as a thriving business, offering ever faster and more exciting derivatives of the Seven. But without Graham Nearn's persistence, conviction, passion and at times sheer bloody-mindedness, the Seven would simply have faded away almost 40 years ago and the motoring world would be a far poorer place for that.