The Caterham Seven is about as close as you’ll find to a car that represents what evo is all about – the thrill of driving. From the moment you squeeze yourself into its racecar-like form to the point you climb out, windswept and possibly a little uncomfortable but grinning like a Cheshire cat, you’ll have experienced one of the most exciting cars on the road.

That the Caterham Seven is still almost identical in concept to the Lotus Seven launched in 1957 is a testament both to Colin Chapman’s original idea and to the constant, small but important tweaks that Lotus and later Caterham have made. Engines have changed over time, different variants have improved the car’s appeal and there have been improvements to quality and reliability, but broadly the idea itself has remained constant – maximum driver interaction.

In a world where every car has traction control, stability control, airbags, electric power steering and an infotainment screen the Seven is an anachronism, but what it sacrifices in usability it will always retain in the kind of driving purity that very few other modern cars can offer.

The Seven is far from perfect and it’s not a car many are likely to use every day thanks to some fairly glaring limitations, but as a vehicle to squirrel away in your garage to enjoy on a sunny weekend, there’s little better. Choosing a favourite model is very difficult indeed, thanks to Caterham’s wide range of options. Whether you want to blast along B-roads or dominate at trackdays, you’ll probably find something to suit.

Performance and 0-60 time – Light weight means all Caterhams are quick, but the most powerful examples are terrifyingly so. Top speed of all models is limited by 1950s aerodynamics.

Engine and gearbox – Plenty of choice here, from the entry-level three-cylinder Suzuki with its notchy manual shift, to highly-strung Ford four-pots on individual throttle bodies paired with racing-style sequentials.

Ride and handling – All Sevens handle beautifully. Behaviour ranges from the Goodwood Revival-style four-wheel drifts of the skinny-tyred 160s, to insane levels of grip with semi-slick-shod 620Rs. The ride is firm with all models, but not as bad as you’d expect.

MPG and running costs – Outright economy varies from model to model – the 160 is very frugal indeed – and many other costs (brakes, tyres, servicing) are kept relatively low thanks to the car’s light weight and simplicity.

Interior and tech – Not much of an interior or tech to speak of, but provided you physically fit, it’s not a bad environment from which to drive. It’s actually worse with the tent-like roof up.

Design – The basic design hails from the 1950s, but still looks great to us, whether in retro Sprint and SuperSprint form or the bright colours and trackday tyres of R versions. 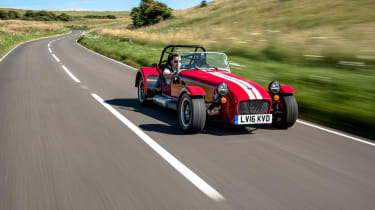 However, all those prices are effectively the DIY rates. Get the factory to build your car and you can add £2500 to those numbers (aside from the 620 models and the SuperSprint, which are all factory-build only), while Caterham’s various options and packs add further costs. Specify the road-orientated S trim and you’re looking at £3495, and R pack cars with limited-slip diffs, uprated suspension, race seats and harnesses and the like add £4495 to the base price of relevant models.

Choose a wide-body car and you’re adding £2500, a six-speed ‘box and it’s £2495, and a dry-sumped engine (standard on the 420 and up) is £1550. A windscreen, hood and side screens comes to £1250, and a long list of other features, from roll cages to shift lights can add hundreds more. Some of the options are quite tempting, so it’s safe to assume you can take the base price of any model with a pinch of salt. 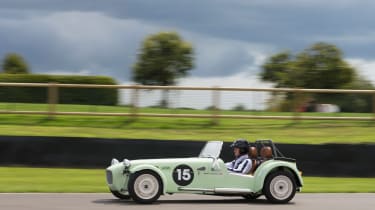 The good news is that Sevens depreciate slowly, and some – like the retro Sprint and SuperSprint special editions – are likely to actually rise in value, as each has been produced in such a limited run and both sold out within hours of their respective on-sale dates.

Rivals? Take your pick – the Seven’s pricing structure puts it up against various vehicles in purely economic terms, though chances are the specialist nature means you’ll be considering other sports cars, and specifically British ones like the Lotus Elise, Ariel Atom or Morgan 3-Wheeler as rivals. 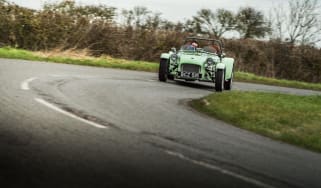 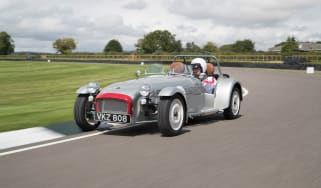 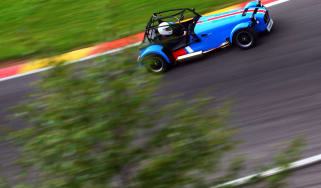 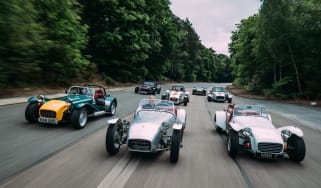 From Lotus Seven to Caterham Seven - the lightweight legend turns 60

We drive a range of Sevens, from an early Series 1 Lotus to modern Caterhams
Advertisement
Visit/caterham/7/18488/caterham-seven-sprint-review-a-thoroughly-retro-car 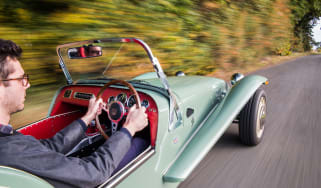 Does the limited edition Sprint feel as old as it looks?
Visit/caterham/7/18254/caterham-seven-sprint-retro-model-sells-out-in-seven-days 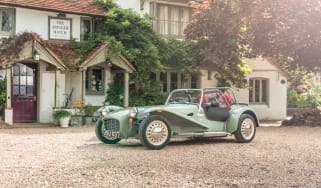 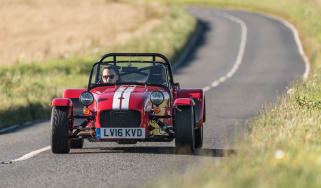 Caterham Seven 310R review – How does the most powerful 1.6 fit in the Seven range?

Can a subtle new look and more power transform the old 270R?
Visit/caterham/7/17572/caterham-tries-bicycle-chassis-tech-to-shave-weight-from-seven 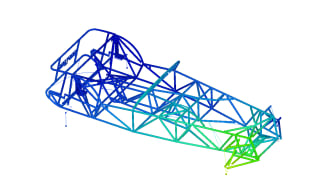 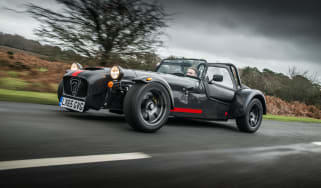 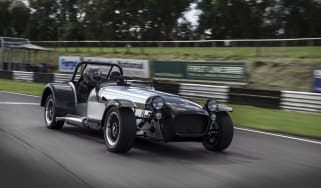 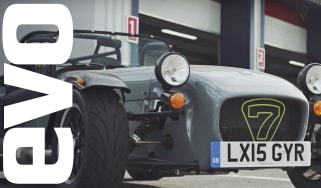 Simplified range, but none of the Seven magic has been lost
Visit/caterham/7/15544/caterham-seven-three-new-models-join-2015-range 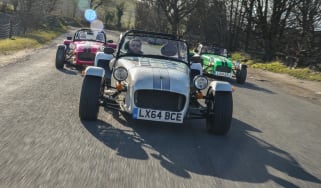 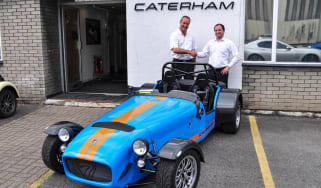 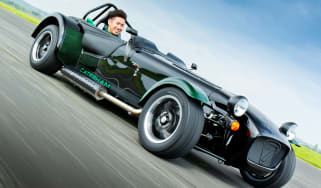 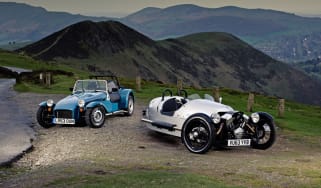 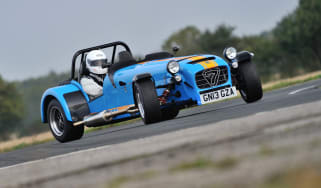 The Caterham 620R is even more powerful and lairy than the R500 it replaces. Review, price and specs here
Visit/caterham/7/13561/caterham-reveals-new-bikes 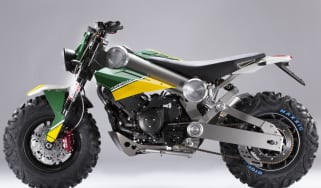 Caterham has revealed two new e-bikes, and an off-road motorcycle as part of its new business plan to diversify. Pictures and details here
Visit/caterham/7/7297/caterham-seven-160-review-price-and-specs 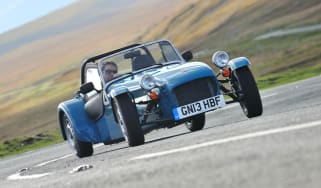 The Caterham Seven 160 is the much-hyped entry-level 7, with a turbocharged three-cylinder engine. Review here
Visit/caterham/7/7292/radical-rxc-review-price-and-specs 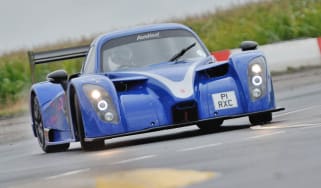 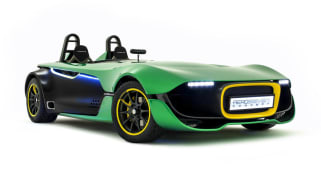 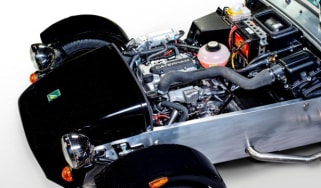 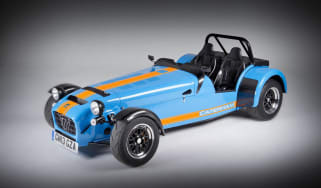 The new Caterham 620R is the most extreme road going Seven yet, and it replaces the R500
Advertisement
Load More
Skip to HeaderSkip to Content