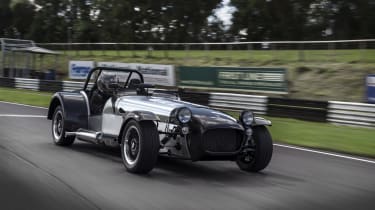 Always entertaining, balanced and fast on road and track, the Superlight offered supercar-slaying performance through a combination of ultra light weight – from GRP seats, and the removal of the windscreen, carpets and spare wheel – and tuning to the model’s Rover K-Series engine.

Ahead of the Goodwood Revival, Caterham has launched an homage to the original with the Superlight Twenty. With reference to both the anniversary of the original and the number Caterham will produce, the Superlight isn’t quite as extreme now as it seemed back then, but it’s still fast.

A 135bhp, 122lb ft version of the 1.6-litre Ford Sigma engine sits under the nose panel, putting its power through a six-speed close-ratio gearbox. The result is a 0-60mph time of 4.9 seconds and a top speed of 122mph – aerodynamics has never been the Seven’s forte.

There’s also a lightweight flywheel to help the engine spin up, a limited-slip differential to curtail unwanted wheelspin at the rear, and a ‘Sport’ suspension pack to lessen your chances of spinning out on the circuit.

Alongside those features is a carbonfibre dashboard – previously the reserve of Caterham’s current range-topper, the 620R – and carbon sports seats. Each car features a numbered dash plaque, unique gauges and a Superlight Twenty motif on the gearknob and key.

In all, the latest Superlight tips the scales at 498kg, for a power-to-weight ratio of 271bhp per ton. That effectively matches the existing Caterham Seven 270, illustrating the car’s position in the Caterham range.

Caterham calls it one of the ‘most visceral’ cars it has produced yet, despite its relative lack of performance next to the more powerful models in the Caterham range. The company says it has attempted to recreate the magic of the original in the latest car, which ‘epitomises Colin Chapman’s fundamental principles of performance through light weight’.

Lightweight it may be, but the price tag reflects its rarity – each of the 20 examples made will cost £29,995 factory-built (£26,995 if you want to build it yourself), to the £22,995 Caterham charges for a Seven 270. The car will be launched at this weekend’s Goodwood Revival.