From Lotus Seven to Caterham Seven - the lightweight legend turns 60 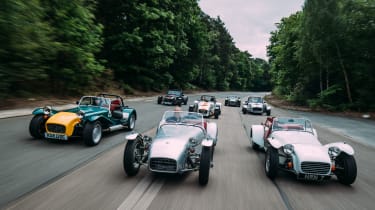 This year the Lotus, and later Caterham Seven turns 60 years old. To celebrate this anniversary evo was invited to drive a collection of significant models from the Seven’s six decades to see if the essence of the original Lotus is still apparent in today’s Caterhams.

First, a bit of history. The origins of Lotus are found in another Seven, the much less sporty Austin Seven. In 1946 Colin Chapman, the founder of Lotus, started tweaking and modifying his little Austin so he could compete in the muddy world of trials. By the late 50s his Austin Seven had gained independent front suspension, custom aluminium bodywork, a more powerful Ford engine, and the name Lotus.

When Chapman took the leap from trials to circuit racing the 750 Motor Club’s regulations meant the Austin Seven’s original engine had to return. This Austin-based special that Chapman used for circuit club racing in 1951 became known as the Lotus MkIII.

The MkIII’s motorsport success mean that Lotus grew so rapidly during the early 1950s that any sort of strict naming convention went out of the window, and each consecutive car didn’t get the appropriate sequential number let alone a consistent way of writing it. For example, the MkVIII appeared in 1954, three years before the Lotus Seven. 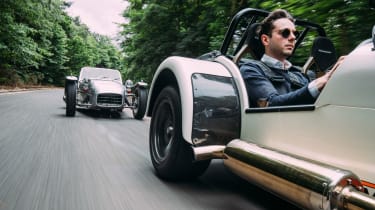 In 1953 Chapman built the Lotus Six, the first of his cars not to use an Austin Seven chassis as its base. The new car used an aluminium body wrapped around a steel frame and its looks moved away from the cigar-shaped bodies of the earlier cars. The Six’s construction was more akin to aeroplanes than club racing cars, yet it was still designed to be built at home by those wishing to avoid costly taxes added to new cars.

The Six was a sales and racing success and it set the template for what would become the Seven in 1957. The new car looked much like the Six, but with its squared off rear-end allowing for some actual luggage space there was a greater emphasis making the Seven a more usable road car. Such compromises didn’t really affect the Seven’s competitiveness, and it was even more successful in club racing than its predecessor.

The success of the Seven meant that, rather than getting a new name, Lotus’s staple club racer kept its moniker after every development stage. Instead the Seven made it to four versions under Lotus’s tenure – the final Series 4 models being the most radical looking, but by far the least popular.

Tax changes in the early 70s meant that the Seven would no longer dodge the extra duty attached to fully-built new cars and the kit car image no longer sat well with the company’s collection of sports cars. In 1972 Lotus struck a deal to allow Caterham to continue building the Seven.

Caterham used up the parts for the unloved Series 4 models and then returned to the now iconic Series 3 chassis to form the basis of all of its models. Since then Caterham has continued to develop the Seven from its basic roots, trying out wider bodies, powerful forced-induction engines and more sophisticated suspension. But can you still identify what made the Seven so popular 60 years ago in the latest models?