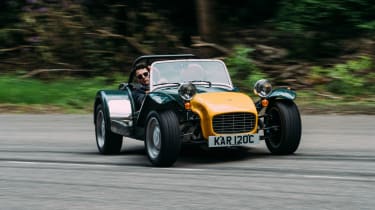 Compared to the Lotus Twin Cam, this Seven feels like a luxury car. It's taller, with deeply padded red leather seats and a squishy steering wheel. The engine is quiet at idle and the gearbox is easy to engage.

A little chuff from the engine as soon as you touch the throttle makes it sound as though it’s being fed by some twin-side draft carbs, but this 1989 actually has a fuel injected K-series engine.

If you’ve read much about Caterhams over the past 20 years or so, you’ll be aware the 1.8-litre 16-valve twin-cam Rover engine is a fan favourite. Well, after experiencing the rorty Lotus motor in the SS it’s decidedly underwhelming.

It’s quiet and tame below 4500rpm, like any modern fuel injected engine. Stretch it into the higher revs and at full throttle you eventually get a hint of that distinctive straight-four bark, but it’s just not aggressive or as spine-tingling as the Lotus Twin Cam.

The lack of drama from the engine makes it feel slower than the SS, even though its engine has 10bhp more. What feels like a higher centre of gravity and softer ride makes it a more relaxed drive, too. There’s plenty of turn in agility, but mid corner, as you try to use the throttle to adjust your trajectory, you long for a limited slip diff. Thanks to its semi-independent De Dion rear axle, the Caterham certainly has more grip over-all than the older Lotus has, but when it does break away, it’s just the inside wheel that spins disappointingly.

Dressed in green and yellow ­– this car is a special edition to commemorate the car’s appearance in the 1960s TV series, the Prisoner – it certainly looks neat, but it just doesn’t have the same ballistic aggression that makes the SS so appealing to drive.