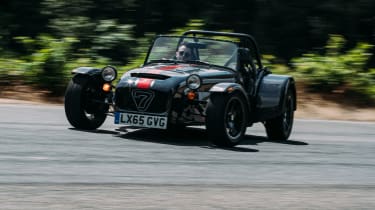 Up to this point the only Seven that has felt underpowered and slow is the Series 1. They’ve all been fast and the throttle has a really significant effect over the way the car behaves. As such, any sort of forced induction hardly seems necessary. But that didn’t stop Caterham making this, a supercharged 310bhp Seven called the 620S.

With 516bhp/ton there’s no surprise the 620S is astonishingly fast. But the sensation of speed is no greater than the R500, really. What the 620S is, though, is snappier. It wants to spin the back wheels more readily than any of the other cars and the rear end wants to slide sideways aggressively.

> Read our full review of the Caterham Seven 620S

The limited amount of lock that’s typical of a Caterham steering rack, usually not a problem as oversteer is small, neat and easily controllable in most Sevens, becomes an issue in the tetchy 620S. Winding on enough corrective steering to compensate for the amount the engine agitates the rear can, sometimes, be physically impossible.

There’s not doubt that the 620S is exciting and very demanding to drive quickly, but without masses more performance than the R500, and without being as manageable as the naturally aspirated Sevens, it just isn’t as approachable or as enjoyable. This 620S is built around Caterham’s wide S5 chassis which, as well as the huge amount of power, might have something to do with its less than subtle handling traits. The wide chassis does give the impression of more room inside, but you still bang your elbows and knees if you drive with any verve.