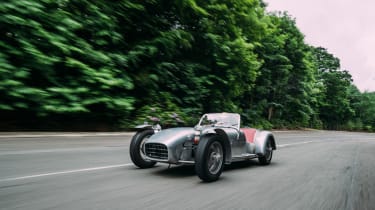 Like the Six, and the many Sevens since, the Series 1 was available with many different engines. Buyers could choose between a Ford side valve motor eligible for 750 Motor Club races, a Coventry Climax or, like this car, an Austin/Morris A-series engine.

Despite being more usuable as a road car than the older Six, no one could describe this Series 1 Seven as plush. The rigid wheel just has a thin covering of leather – there’s no padding on the rim as well – and the seats are merely two cushions, one for your back and one for your bum.

It also feels tiny, the little gearknob sprouting from the transmission tunnel – about 6-inches further forward than seems comfortable – and the thin pedals make the Series 1 seems very delicate.

The way it nimbly tracks along a road adds to this feeling too. Minor adjustments to the steering have it wandering all over the road, but once you’re acclimatised you can be very accurate about where you place this tiny little car.

Except when you hit a bump. It might be stable and secure on a smooth road but encounter a rough section and you become instantly aware of its antiquated suspension. Not only does the body rattle and shake vertically, it sways side-to-side in an alarming fashion, too.

In all honesty though it doesn’t feel fast, and you’d find it difficult to convince anyone unfamiliar with old cars that this is in fact a sports car. The 948cc 37bhp engine is grotty and industrial, while the gearbox is so difficult to use that you actively avoid trying to change gear. The engine’s reluctance to rev freely means heel and toe down changes are practically impossible to execute smoothly. And if you manage a down change you’ll probably hear a chirp from the back tyres when you let the clutch out as you slow the rear axle too much.

Instead of changing gear, you just stay in a high gear and maintain as much speed through corner as the tyres can handle. The drum brakes are so poor you often don’t have the choice of slowing down significantly anyway.

All this contributes to something that’s very demanding to drive. Choosing your line to avoid bumps and ruts while also maintaining speed requires huge amounts of attention. Then trying to anticipate where you might need to brake, way before what would seem acceptable or safe these days, takes equally as much brain space. It’s a good job it doesn’t go that fast, then.