The R500 is the antithesis to the ‘usable’ and luxurious CSR and Prisoner car. No windscreen, Kevlar seats, carbonfibre bodywork, a 263bhp four-cylinder 2-litre engine, an LSD and, if that wasn’t extreme enough, a six-speed sequential gearbox.

There’s a dogged intent to everything about the R500 that raises your heart rate before you’ve even turned a wheel. It idles with a hectic fizz that sends vibrations through the steering wheel and the firm bucket seats.

Previous experience of recalcitrant sequential gearboxes make me anxious of the R500’s ‘box. But, at the first tug of the lever they all evaporate as the R500 slots neatly into gear. No fuss, no drama – not even a lurch forward and a clunk to let you know you’re in gear – the N on the dash turns to a 1 and you’re ready to go. If it weren’t for the need to use the clutch, it could be a Volkswagen Group DSG ‘box; it’s that easy.

No windscreen and no helmet sounds like a disastrous combination but, as long as you have something to cover your eyes, the carbonfibre aero flick that directs air away from your face works well. It’s actually much more pleasant than a standard Seven windscreen used without any doors to stop the air vacuum forming right in front of your face and making it difficult to breathe. In fact it opens up the cabin, making it feel airy and generous like that of the Series 1, just. 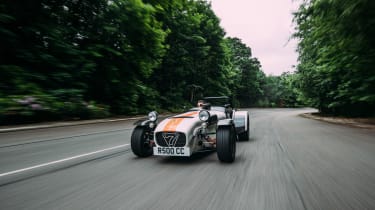 Once you put your foot down though, the acceleration and performance is so savage that you really don’t pay much attention to the cabin or anything other than what’s immediately in front of you. Anything that obscures that view, like the dash-mounted rear view mirror, becomes a nuisance.

There’s so much grip across both axles when you turn that you can really, really attack a corner. Where the other Sevens seem to want to break away at the rear just on turn-in, or even lift-off oversteer, the R500 is much more tied down.

But don’t think that it’s all about traction. The aggressive four-cylinder has so much performance that it has such a significant affect over the car. Its response is instant and, thanks to the R500’s tiny kerb weight of 506kg, the toppy engine is actually still effective at low revs. Such a vast and useable rev range means that you can also tease the car around any corner using the accelerator, tight second gear ones or fast fourth gear ones, it doesn’t matter.

As useful and as intense as the engine is to use, the side exit exhaust that’s only inches from your ear, dominates the noise. You get none of the guttural induction noise that comes from the same-engined CSR, let alone the sublime sound the Twin Cam makes. And that’s a real shame as you don’t lust over the engine like you do in the other Sevens, but then the R500 has plenty of other appeal.