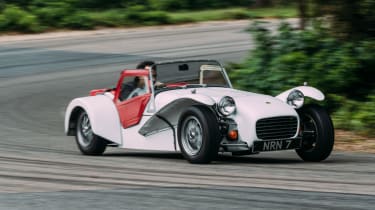 The SS name first appeared on the Coventry Climax-powered Series 2 cars. The initial stood for Super Seven and were only fitted to the most powerful cars of the range. The Series 3 chassis went without an SS for a long time as Lotus said the twin-cam from the Elan, Cortina and Escort simply wouldn’t fit. But in 1969 Lotus managed to squeeze the 8-valve 1.6-litre engine into the narrow bonnet of the Seven.

And, boy, are we glad they did. As soon as the fighty little four bursts into life you know it’s something special. There’s a hardness to the noise it makes, whether it’s the hollow gurgle at low revs, the guttural warble when its under load or the crisp rasp as you get close to its 6500rpm limit. It helps that you’re sat carb-side on the engine too, as you get uninterrupted access to the induction noise.

It isn’t just the noise it makes that’s so captivating, the engine is so much fun to use throughout its rev range; it's sharp, quick to react, powerful and, despite a lot of coughing and spluttering at really very low revs, really tractable when you’re driving.

To an extent how the rest of the car behaves is unimportant, as the engine is so wonderful that the chassis could be a disaster and the car would still be great. Still though, the gear change is solid and direct, the brakes are effective – more than up to the task of slowing the 570kg car. The suspension is much more composed than the early Seven, too; its live rear axle is still upset by bumps but it doesn’t result in such unnerving lateral movement. This slightly unsophisticated axle means that the throttle can very easily manipulate the rear end, and a little tweak of your right foot creates a useful rotation.

After experiencing the Series 1, the Twin Cam does feel more enclosed and I begin to long for the openness of the early car. This Series 3 chassis feels lower, more aggressive and marginally safer, yes, but I’m no longer able to move my arms with the same freedom as the more open Series 1. However, although my elbows come in for a bit of a pasting when cornering, the SS is a huge leap ahead in performance but also the start of the Seven’s character than modern Caterham owners would recognise.