A more usable alternative to the wild 620R, the 620S is the most exciting road-biased Caterham on sale 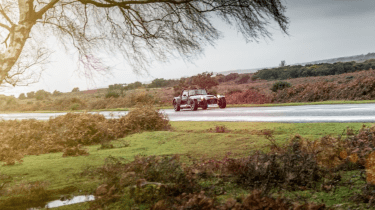 The 620S is the fastest road-biased Caterham ever. It joins the track-ready 620R at the top of the Caterham line-up, sharing that model’s 310bhp supercharged engine.

With a full windscreen and hood, the option of heated seats (a Caterham first) and a road-focused chassis set-up the 620S is billed as a more useable version of the hardcore 620R. To that end it can also be specified with the wider ‘S5’ chassis, which offers more space within the cabin.

The 1999cc four-cylinder Ford Duratec engine has been supercharged to develop 310bhp at 7700rpm. To put that in context, the next most powerful engine Caterham offers is the 210bhp unit in the 420 models.

> Read our review of the Caterham product range here

Whereas the 620R uses a six-speed sequential gearbox, the 620S makes do with a five-speed manual transmission, lifted from the Mazda MX-5. A limited-slip differential is standard fit. 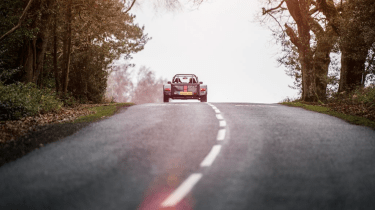 With its road-going brief in mind the 620S features a much less aggressive chassis tune than the 620R. The front axle, for instance, runs less camber and the spring rates have been reduced to better deal with bumpy surfaces.

Rather than the super sticky 13-inch Avon ZZR tyres, as fitted to the 620R, the 620S uses the less uncompromising ZZS rubber, this time on 15-inch wheels.

The 620S can be identified from lesser models by the additional intake in the nose cone and a pair of small carbon fibre dive planes.

Alarming. Actually, with its slick manual gearbox, compliant chassis, full weather protection and tractable engine the 620S is no more taxing in normal driving than any other road-focused Caterham. The wider S5 chassis also means the cabin feels less claustrophobic than narrow-body models while the bigger fuel tank means it has more range, too.

It’s when you start to work the engine hard that the 620S reveals its raucous, manic side. On a greasy road surface the ripping supercharged engine will overwhelm the rear tyres in any of the first three gears.

Regardless of the weather second gear is utterly violently unhinged. The engine picks up smartly at 4000rpm, then shrieks into life from 5000rpm, at which point the rear tyres rapidly turn from a solid into a gas. They don’t stand a chance. Third gear is just long enough that the rear axle can cope with the full force of the Duratec engine in the dry, but on damp or bumpy surfaces the loss of traction beyond 5000rpm is sudden enough to stab the car into oversteer – although never to the point of the car snapping dangerously.

With some deft throttle control you can use the full reach of third gear on greasy roads, but you’re better off changing up to fourth and burying the throttle pedal. On dry surfaces there’s plenty of traction once you’re out of second gear. 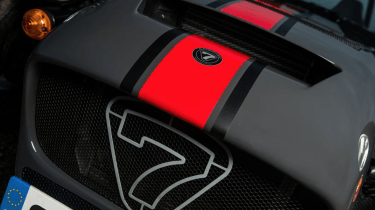 The engine does its best work in the final 3000rpm of the rev range. The car piles on speed in a frantic, elastic way through the gears, the accelerative force hardly diminishing as you change up through the ratios. In that range the 620S is genuinely alarming, but a really torque-rich supercar – such as a McLaren 650S –does deliver a more forceful hit in the back.

It takes a particularly weather-beaten road surface to tie the chassis in knots. On a typical British back road the 620S has enough pliancy and composure to absorb bumps and smother potholes, all the while tracking straight and true over ruts and cambers.

The more focussed 620R would certainly show the 620S the way around a circuit, but road-biased or not this model would still have enough control, precision and outright grip to excite and entertain on track. For all but the most committed trackday drivers the 620S is a much more roundly capable car than the hardcore model.

The 420R remains the sweet spot in the Caterham range – not least because it undercuts the 620S by £11,000 – but it’s impossible not to be drawn to the sheer drama and excitement offered by the more powerful model. 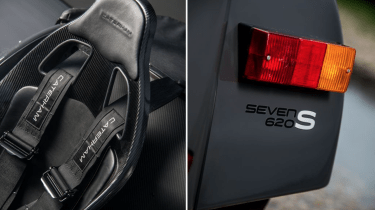 Aside from the obvious in-house alternative the 620S faces stiff competition from a number of other lightweight sports car companies. Ariel only offers one Atom model for the time being – priced at £30,500 it undercuts the 620S by almost £15,000, but it gives up 65bhp to the Caterham and doesn’t offer the same weather protection.

You’ll have your pick of the Lotus Elise range at this price point – even the fastest models lack the 620S’s straight-line punch, but they are significantly more useable again.