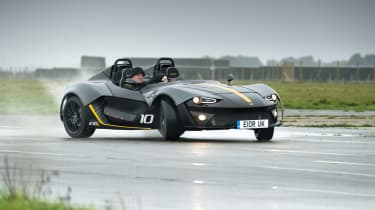 The Zenos E10 R is the fastest, most focussed Zenos to date. It becomes the third derivative in the newcomer’s line up, joining the entry-level E10 and the mid-range E10 S.

While the E10 S uses a 2-litre EcoBoost engine the E10 R is fitted with the bigger 2.3-litre unit, similar to that in the Ford Focus RS. In the Zenos it’s good for 350bhp and 350lb ft of torque. According to company founder Mark Edwards he and his team achieved the power figures they had targeted on the first day on the dyno without having to stress the engine too hard. ‘We could have had even more power, but we don’t want owners to have to rebuild their engines every year,’ he says. ‘Ford has tested these engines to the moon and back and they’ve got bags of power.’

The gearbox is still a six-speed manual, but the shift action has been shortened for a more precise and direct throw and the gearknob itself is now a bespoke Zenos item. The company does offer a limited slip differential but it insists the standard open differential is more than adequate.

Zenos estimates 0-62mph in 3.0 seconds and 155mph flat out. Weighing just 700kg (dry) the E10 R has a power to weight ratio of 508bhp/tonne, which puts it firmly in the performance car big leagues. 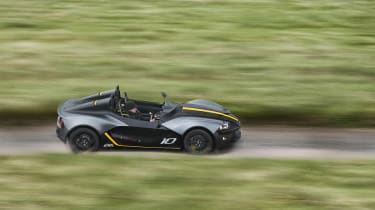 Zenos hopes owners will still use their E10 Rs on the road, but given its more focussed brief it does get more aggressive chassis settings. Spring rates are up slightly (more so on the rear axle), the dampers have been retuned, lightweight wheels save 10kg of unsprung mass and the grippier Avon ZZR tyres are fitted in place of the ZZS rubber.

The entire braking system has been heavily revised in an effort to provide a more progressive, readable brake pedal. The ventilated front discs, meanwhile, are gripped by four-pot Alcon callipers.

The Zenos is built around an extruded aluminium spine that’s bonded to a composite carbon fibre and plastic tub. It gives much of the structural rigidity and lightness of a full carbon tub at a fraction of the cost.

The E10 R is comfortably the best Zenos we’ve driven, both on road and track. The biggest improvement is in the braking, the middle pedal now much easier to modulate and the point of lock up much easier to read, which gives you enormous confidence on the way into a corner. You can hit the pedal with as much force as you can muster from high speeds, so sheer braking power is huge, too.

The more powerful 2.3-litre engine is a much livelier, more characterful unit than the 2-litre – if not as thrilling as a similarly powerful normally-aspirated engine would be – and the extra performance adds another layer of excitement to the whole driving experience over the E10 S. The gearshift has a shorter throw, meanwhile, which is much more befitting of a car of this type. 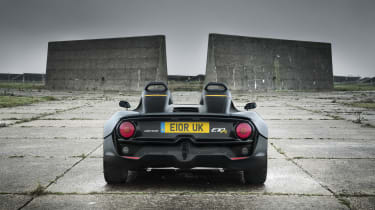 The body stays flat in hard cornering on circuit with just enough lean to let you read grip levels across the loaded side of the car. Grip is vast. The balance is very neutral, too, with just a touch of understeer at the limit. In fact, in the dry there’s almost no oversteer in the chassis at all.

With such strong traction – you can give it full throttle in second gear without any trouble – you really have to try hard to make it oversteer under power. In fact, traction is so strong that you really don’t need the optional limited slip differential unless you insist on drifting your way around a lap.

The steering is sharp, feelsome and direct and over bigger kerbs the damping is so well resolved – you can hit a large sausage kerb and hardly feel the impact. That pliancy translates beautifully into road driving, too, the E10 R riding bumps and dealing with compressions impressively well. It also tracks straight and true without tugging itself across the crown of the road.

At £39,995 the E10 R is priced alongside some seriously talented lightweight sports cars. The similarly fast Caterham 620S is £5000 more expensive, while the lunatic Ariel Atom 3.5 is slightly cheaper.