The Ariel Atom 3.5 is a true thriller on road and track. 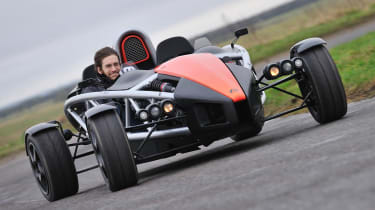 The Ariel Atom 3.5. Ariel couldn’t call it Atom 4 because a whole new integer only appears when the engine changes, but nevertheless there has been a raft of small upgrades aiming to make this supercharged model the best one yet. It costs from £38,000.

Most of the chassis changes are things that Ariel learnt while building the wild Ariel Atom V8, with new suspension pick-up points and bracing around the engine all helping to make the chassis stiffer. The 3.5 also gets the carbon-surrounded digital dash from the V8, which looks very smart, and the nose panel has been subtly changed with a crease now running down the middle. The big one-piece seats have also been made a little stiffer.

Perhaps the most obvious update is the lights. Instead of the large, bug-eyed headlamps that used to sit back up towards the wing mirrors, the 3.5 gets two neat rows of three bulbs further down its nose. The supercharged Honda Civic Type R sourced 2-litre engine also gets a bit more power (up to 310bhp), but given the 3’s already eye-watering ability in that department, it seems like the most incidental of the upgrades. It contines to be mated to a convetional H-pattern six-speed manual gearbox.

The Atom’s handling has always taken a while to get used to, feeling fairly wild and intimidating to start with. It’s not intuitive like a Caterham 7. But stick with it and the Atom is much more driveable than you first imagine and once you learn to work with the Porsche 911-like weight distribution and be brave with the throttle, it’s incredibly rewarding.

Over the last few years we’ve enjoyed every Atom I’ve driven, but this one has the perfect set-up and is improved in every area. It exhibits little or none of the understeer often present in slow corners or in wet conditions, the transition into oversteer is smooth and precise, and the brakes – which have been so easy to lock up in the past – work brilliantly. The more rigid chassis and improved damping have really brought the appeal of this mad, manic little car into sharp focus, and given the perfect platform to an engine with astonishing torque and top-end fury that can leave you deaf and more than a little befuddled.

What really strikes you about the Atom is how immersive it is. The performance is physical, the shriek of the supercharger drills into your skull, you on track you can clearly see the wheels hopping over kerbs, and you can feel the vibrations of the engine and fizzing rear wheels through the fixed plastic seat (the only thing we might change as it’s hellishly uncomfortable for certain shapes and sizes). And now you can really impose yourself on the chassis with little need to manage understeer. It’ll slide in fifth gear at over 100mph and down the back straight of Blyton Park in Lincolnshire (where we clocked a lap of 1:03.4), 134.01mph felt sensational.

The Atom 3.5 might not look or feel wildly different to the Atom 3, but to be honest it looked and felt plenty wild enough already. What the changes do is just subtly improve the Atom in areas where it was needed and keep it feeling as fresh as the day it first landed.

The market for track cars is now chock-full with hot hatchbacks, coupes and track-specials like the Atom – there’s plenty out there. The Caterham Seven 620R is a direct competitor, priced from £52k, offering incredible performance, with 310bhp launching it from 0-62mph in 2.8sec. If the 620R is too much – in terms of price and performance – a Caterham 420R will provide a similar experience. 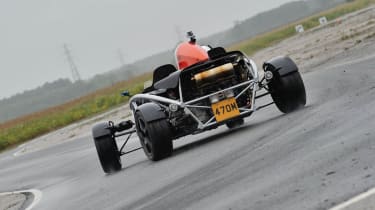 The £46k Lotus Elise 250 Cup is a stripped back Elise that is fantastic on the road and surprisingly friendly on track. Like the Atom it’s supercharged, developing 243bhp from a 1.8-litre four-cylinder engine. 0-62mph is dealt with in 3.9sec, over a second slower than the Atom, but the trade-off is a car that you could use everyday – according to Lotus.

The Honda Civic Type R can’t come close to the Atom in raw performance terms, but has track credentials and the Nurburgring stamp of approval. Despite its hatchback origins it performs well on track, with a limited-slip differential, huge grip reserves and a strong turbocharged 2.0-litre engine that develops 316bhp and 295lb ft of torque.

Alongside the Atom, Ariel offer the Nomad, a bare-bones off-roader that looks Dakar-ready. It won’t match the Atom for speed on road or track, but is capable on both and prioritises fun. Using a slightly detuned version of supercharged-K24 engine found in the Atom 3.5, producing 290bhp, the Nomad dispatches 0-62mph in 3.1sec. 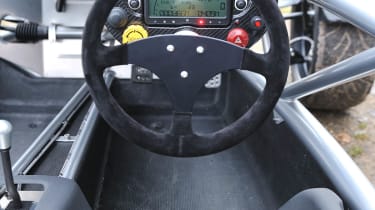 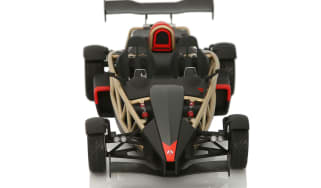 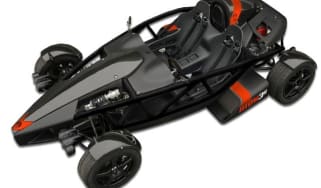 The Atom 3 gets a turbocharger and 359bhp in its new US-focused 3S guise
Ariel Atom 3.5R pictures, specs and video review 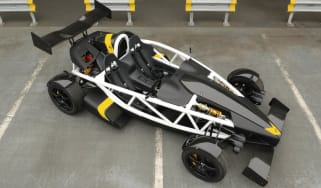 Ariel has announced the even more hardcore Atom model, called the 3.5R. We drive it on a soaking wet Bedford Autodrome
Ariel Atom 3.5R video review 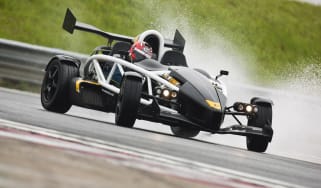 Is this the wildest Ariel Atom yet? We try the lairy new Atom 3.5R on a very wet circuit. Video review here
Zenos E10 news, price and specs 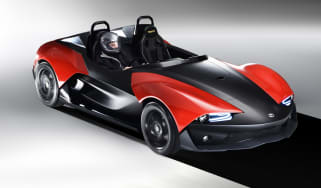 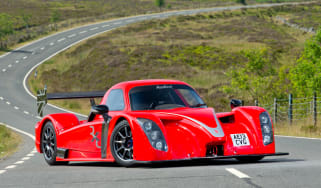 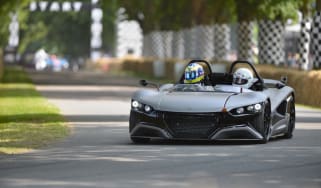 The VUHL 05 is a Mexican made sports, that has been confirmed for production, following its launch at the 2013 Goodwood Festival of Speed
Ariel Atom buying guide 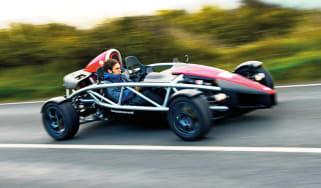 A great British success story, the Ariel Atom serves up as many thrills as you can handle. Here's what you need to know about buying one.
Ariel Atom racing at Bedford How Fast 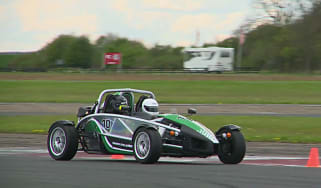 evo team, and reader Ash Miller, battle for the fastest lap time at the Bedford Autodrome during an MSV How Fast event.
2013 Ariel Atom Cup review 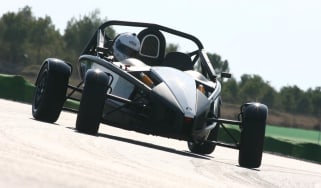 We review the racing car that will compete in the 2013 Ariel Atom Cup. More hardcore than the regular Atom?
Ariel Atom 3.5 launched 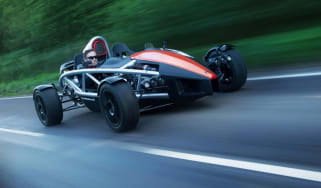 Ariel has unveiled an updated version of the Atom, said to be more road-biased
700bhp Ariel Atom 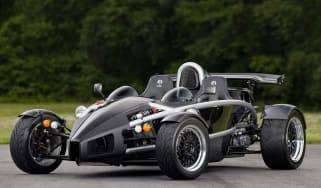 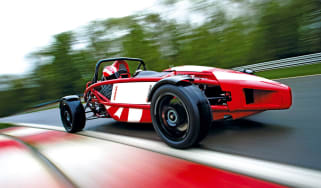 A new race series from Ariel called the 'Atom Cup' has just been announced, starting next year in the UK
Palmersport buys Ariel Atom fleet 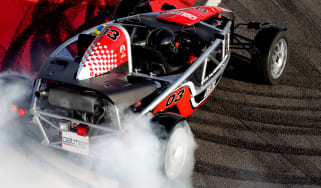 Palmersport, the team behind the Bedford Autodrome, buy a bunch of Ariel Atoms for track events
evo hillclimbs an Ariel Atom 300 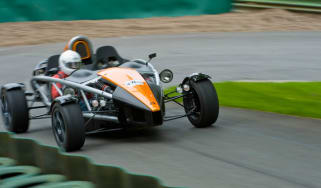 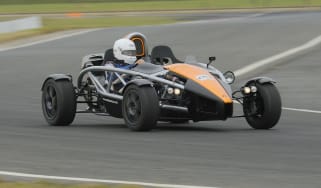 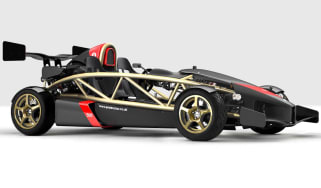 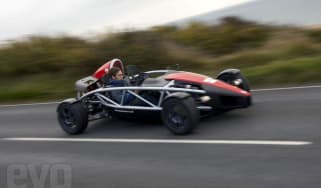 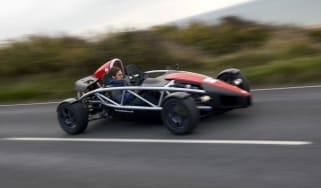 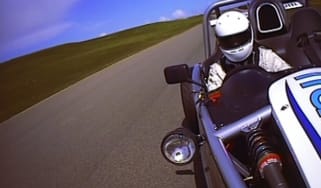 Richard Meaden gets to grips with the mighty Ariel Atom in Anglesea. Or as he put it himself: 'I got in and grabbed it by the scruff of the neck...'
Skip to HeaderSkip to Content