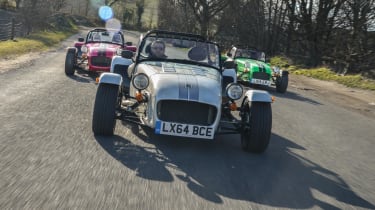 Caterham has simplified the Seven range with three new models, the Seven 270, 360 and 480.

All feature Ford engines and a host of options is available to customise the car to the owner’s preferences – think race seats and limited-slip differentials rather than decals and shiny trim.

Sitting above the three-cylinder Seven 160, the new 270 replaces the outgoing Roadsport 140 and Supersport for a £22,995 price tag.

Power comes from an updated 1.6-litre Ford Sigma engine, with variable-valve timing and 10bhp more than the old Roadsport 125. A 5.0-second 0-62mph sprint is the result, with a 122mph top speed. 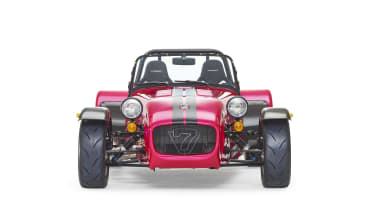 Caterham has also introduced two new accessory packs, which can be optioned with several models throughout the range.

The S Pack provides a few simple upgrades for the sparsely-equipped Seven Range. Among them are a set of 14in alloy wheels – the standard car wears steel items – a fully carpeted interior, a heater, and the luxury of a full windscreen, hood and side screens.

Alternatively, the cars be specified with the R Pack. This brings a limited-slip differential, lightweight flywheel, sport suspension, 15in alloy wheels and a host of interior details – a carbonfibre dashboard, composite race seats, a 4-point harness and a shift light.

Caterham says the new model range means there’s a ‘Seven for everyone’. The new models are on sale now.