The Caterham Seven 160 is the much-hyped entry-level 7, with a turbocharged three-cylinder engine. Review here 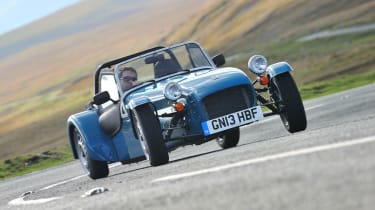 The Caterham Seven 160, the new entry-level 7 that weighs in at just 490kg and £17,995 fully built (or £14,995 in kit form). Its Suzuki-sourced 660cc turbo engine possesses just three cylinders and 80bhp, is mated to a five-speed manual gearbox and drives the rearmost pair of skinny 14-inch steel wheels, which are wrapped in 155/65 Avon ZT5 tyres. If you're curious, the 160's name comes from a doubling of its power figure (just like its Caterham 620R cousin), and therefore an approximation of its power-to-weight ratio.

The 660cc turbocharged engine was originally designed for tiny Japanese Kei-car applications and it certainly has a white-goods feel at idle. Still, there might be surprises in store as it produces its peak 80bhp (up from its standard 64bhp) at 7000rpm and the limiter doesn’t kick-in until a promising 7700rpm. Torque is rated at 79lb ft at 3400rpm. For the record Caterham claims that the 160 will complete the 0-60mph sprint in 6.5sec and run out of puff at 100mph. By way of comparison the Roadsport 125’s 1.6-litre Ford Sigma engine delivers 0-60 in 5.9sec and a 112mph top speed for £22,995.

Beneath and poking out from the simple aluminium skin is a standard Seven chassis not so much downgraded, as backdated. So at the front it has standard wishbones rather than the longer Superlight versions we’ve become accustomed to. Just below your backside is a drum brake-equipped live axle instead of the De Dion unit that has also become a Seven mainstay in recent times. It’s there because it’s light, simple and helps to keep the price down, too. On smooth tracks live axle Caterhams are no problem at all, but on knarly roads it could be an issue. Especially when paired with tyres that would pass for space-savers on an average family hatch these days…

The 160 is very short geared to make the most of its 80bhp, with second gear all done at 45mph and third gear not quite reaching 70mph. So you’re immediately busy and engaged and within maybe 300 yards you’re a bit of a fan of that tiny engine. Turbo lag simply isn’t an issue due to the gearing. From 40 to 80mph it’s a genuinely quick little car and, more importantly, the power-to-grip ratio feels just about spot-on.

Like the gearing, the chassis keeps you rather busy. Where a Superlight would have rock solid control and a real sense of precision the 160 wanders around on its sidewalls and the softer suspension/live axle combination seems to serve-up a strange mix of roll and heave matched to occasional shuddering thumps thwacking through to your seat. On a really bumpy road your backside/seat relationship mirrors the rear axle’s flight off the ground almost exactly. For these first few miles – and absurd as this sounds – the engine feels too much for the chassis.

However, after you’ve settled in all that’s left is a warm glow of satisfaction and a sense of real achievement. You’ve relaxed into the car, stopped wrestling it and started trusting it to grip at the front and then swing elegantly at the rear in a neat arc to minimise your steering input. This pattern is the key to the 160 and takes practice to master. What’s really special about this constantly shifting balance and the way the 160 demands to be steered on the throttle is that it really is a constant process. Whether you’re doing 30mph in third or 60mph in fourth you will be micro-managing the balance, thinking about every little input that you make and driving close to or beyond the limit. Forget the ‘accessibility’ of a GT86 or any hot hatch you care to mention, this is properly accessible.

There is still one thorny issue that must be addressed. The 160 costs £17,995 fully built. Add paint to that and the price rises to £19,145. Then you’ll want the ‘on the road package’ which includes IVA inspection, a year’s road tax, registration and delivery and bumps things up to £19,705. Oh, and the weather equipment (windscreen, doors, hood) at £1250 and heater (£300) could be deemed essential, too. So the optimum fully-built, painted and usable Seven 160 is £21,255. This is not a cheap car by any stretch of the imagination.

There will be a road test of the Caterham Seven 160 in evo issue 190, on sale Wednesday November 6