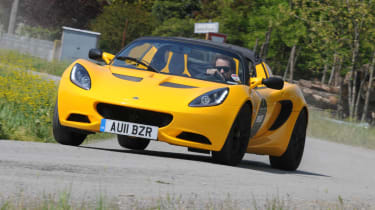 What is it?  The Lotus Elise on a diet. Lotus has managed to remove 24kg of weight from somewhere. Unlike other stripped out specials, though, because you get less, you pay less. That makes this the entry-point to Lotus ownership, costing £27,500. Technical highlights?  The engine is carried over from the cheapest Elise – a 134bhp 1.6-litre Toyota-sourced four-pot to be precise. It doesn’t sound like much on paper, or on full throttle for that matter, but with only 852kg to deal with it’s enough to make brisk progress. There’s no air-con, no stereo and for the first time on an Elise there’s a button marked ‘Sport’ which activates and intermediate setting for the stability control, somewhere between on and completely off. Weight savings come from a smaller motorsport-derived battery, deletion of noise insulation and those lightly-padded body-coloured seats, but claimed performance is identical to the standard car. What’s it like to drive?  Sublime. Our test route took in 600km of the finest Italian country roads and not at any point did we wish were driving something else. What the Elise does magnificently is carry its speed through the corners, rather than piling it on once you’re past the apex. The small steering wheel squirms in your hands but delivers to them, in minute detail, what’s going on at road level. It’s light just off-centre, but quickly loads up as you up the speed and increase the steering angle. The lack of stereo, air-con or anything else in the interior simply forces you to focus on the experience – and there’s less to go wrong of course.  How does it compare?  Unless you start looking at Caterhams and Atoms, none of the Elise’s roadster rivals, like the MX-5, can match the purity of the driving experience. The Club Racer drives home this advantage. Try something further up the Lotus range and it will seem over-complicated and expensive in comparison. Anything else I need to know?  With Lotus’ grand plans for bigger, more expensive models – beginning with the Esprit in 2013, it’s refreshing to see it still has one eye on weight reduction. The other advantage of course is that with fuel economy of 45mpg, the Club Racer will cost pennies to run.