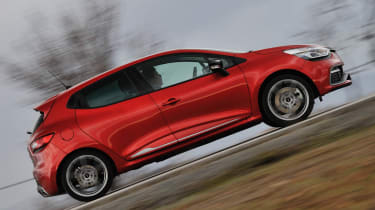 What is it? The all-new Renaultsport Clio 200, complete with a turbocharged engine and paddle-shift transmission. It’s also a five-door car for the first time, and is priced in the UK from £18,995 (full Clio 200 Turbo price and spec details here). Sales begin in April. Technical highlights? With 197bhp and 177lb ft of torque, the new 1.6-litre turbo engine’s headline figures are not night and day different to the old model’s 2-litre naturally aspirated unit. But with both available much lower down in the rev range, both performance and economy improve – 0-62mph drops a few tenths while the mpg figure is up a massive 30 per cent, from 34.5 to 44.8mpg. The gearbox also contributes here; a six-speed twin-clutch 'EDC' transmission with steering column-mounted paddles allowing manual shifting.

There’s tons more too - Renaultsport’s electronic ‘RS Diff’ works to counter both understeer and wheelspin by micro-braking whichever front wheel threatens to lose grip while RS Drive offers three different driving modes (Normal, Sport and Race), each one tinkering with throttle response, gearshift speeds, steering weight and the strength of stability control. In Race, the latter is completely off. There’s also new hydraulic bump-stop technology in the suspension – which can trace its roots to the Paris-Dakar rally – designed to smooth off ride quality with no impact on control.

As ever, you’ve a choice of standard or Cup chassis, the latter a £450 option which lowers and stiffens the suspension 3mm and 15 per cent respectively while introducing a quicker steering rack and 18in gloss black alloy wheels wrapped in stickier Dunlop Sport Maxx tyres.What’s it like to drive?

That extra low down and mid-range torque really helps pull you out of the corners and the EDC gearbox maintains your forward momentum in a way you’d struggle to match with a manual. It also allows you to focus solely on picking the sweetest line through the corners, the effortless up and downshifts enabling you to readily find your groove.

Consequently in point-to-point terms the Clio 200 Turbo is an extremely rapid and impressively capable car. It’s certainly more flattering to drive hard than the old 200, and its performance is much easier to extract for sustained periods of time. Given Renaultsport’s objectives you’d have to say it’s hit the spot, but it’s still impossible not to yearn for previous model’s urgency and love of revs. Seems you always want a little of what you can’t have.

There’s no question it’s a car that’s been honed by hardcore drivers, but in gaining bandwidth to appeal to drivers who until now have felt the RS Clio was too uncompromising, the style of performance is totally different. That doesn’t prevent it from being a very good car in many respects, but it’s not yet a great one, at least by evo’s exacting and unashamedly singular criteria.How does it compare?

In basic form, the Renaultsport Clio 200 Turbo is priced £2000 higher than a 179bhp Ford Fiesta ST and £100 more than a 197bhp Peugeot 208 GTI, both coming with a more purist-minded six-speed manual gearbox. On the evidence of this first drive it’ll still take something pretty special to outperform the Clio, but our first impressions of the little Ford are good too. Click here for our Fiesta ST first drive.

We only drove a standard, Sport-chassis car on road. A go in the Cup-equipped car on track revealed quite exuberant handling; with the space to play and a damp, slippery surface the Clio 200 Turbo Cup is hilariously, brilliantly lively. Full judgement is reserved until we can try both cars on UK roads, though.

Oh, and there's a more in-depth review - and more exploration of the new Clio 200 Turbo's technology - in issue 182 of evo, on sale Wednesday March 27.