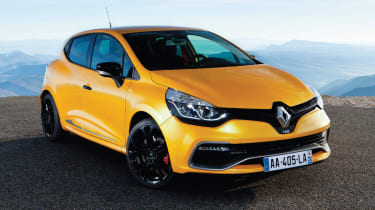 Renault has priced its new Clio 200 Turbo. The latest Renaultsport hot hatch will cost from £18,995, coming with a six-speed twin-clutch gearbox and five-door layout as standard. Its prices makes it £2000 pricier than the new Ford Fiesta ST and £100 costlier than the Peugeot 208 GTI, as well as nearly £2k more than its 200 Cup predecessor. All of these cars are three-door manuals with far less tech than the new Clio, however. A VW Polo GTI DSG with five doors is priced higher, at £20,050. Among the new Clio 200’s standard equipment is Renaultsport’s new R.S. Diff, R.S. Drive selectable driving modes, 17in alloy wheels, Bluetooth, aircon, keyless start, cruise control and front sports seats. Standard tyres are Goodyear Eagles. Among the options are 18in alloys (£185), climate control (£410), leather seats (£1000) and the Renaultsport Monitor data logger (£95). The most glamorous option remains Renaultsport’s famed Cup pack, which for £450, lowers and stiffens the chassis (by 3mm and 15 per cent respectively), brings a quicker steering rack, red brake calipers and gloss black 18in alloys with Dunlop Sport Maxx tyres.

A £1000 Lux pack, on the other hand, adds a premium stereo system, TomTom satnav, climate control, rear electric windows and auto lights and wipers. The new Renault Clio 200 Turbo uses a 1.6-litre turbo engine with 197bhp and 177lb ft of torque. Those figures aren’t dissimilar to the car it replaces, but thanks to its new forced induction engine, performance improves slightly with a 6.7sec dash to 62mph and a 143mph top speed. Fuel economy also improves, with a claimed 44.8mpg representing more a 30 per cent rise. Renaultsport Clio 200 Turbo order books open on April 8, with UK deliveries in June. We’ll have a review of the car online later today.