Latest Seven is as entertaining as ever, but you’ll pay handsomely for the retro charm 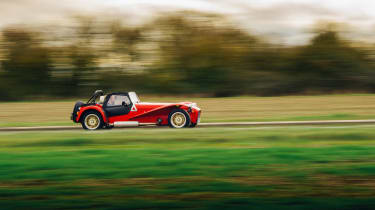 Caterham’s first two retro-inspired Sevens, the Sprint and SuperSprint, sold out within a matter of days. The British sports car firm will no doubt be hoping for more of the same with its latest throwback, the Super Seven 1600.

While those cars were based on the three-cylinder Suzuki-powered Seven 160 however, the latest special is closer to the entry-level four-cylinder car, the Seven 270, while the trappings of Caterham’s R specification models are ditched in favour of a softer, more road-biased set-up.

The joy of the previous retro cars was how easy they were to exploit at road-going speeds, so the Super Seven 1600 certainly has promise – but might a high price tag count against it?

The 1600 is based loosely on the 1.6-litre Ford Sigma-powered Seven 270, attached to a five-speed manual gearbox and an open differential. Cleverly, given the retro brief, induction is handled by a pair of Jenvey heritage throttle bodies which look just like a pair of old Weber carbs, and whose filters poke through the aluminium bonnet.

In this relatively modest state of tune you get 135bhp and 122lb ft to play with. With a dry kerb weight of 565kg, power-to-weight is slightly down on the Seven 270 at 243bhp per ton, but a standing start to 60mph still takes only five seconds – over three seconds quicker than a similarly powerful 1.5-litre MX-5. There really is no substitute for low mass. 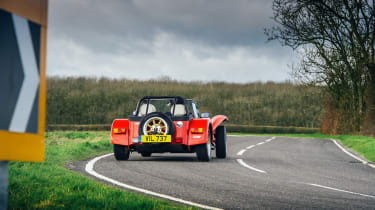 Twist the key in its usual slot under the dash, thumb the starter, and the Sigma coughs into an unsteady idle, helped into life by a few prods of the throttle as if the Jenveys really were carburettors. The whole structure shivers, and each further brush of the right-hand pedal is a stereophonic mix of snorting throttle bodies and a gruff bark from the exhaust down by your right elbow.

It’s hard not to wish for a little more top-end from the 1.6 – the hotter motor from the Seven 310 would be a treat – but the carb-like growl feels authentically old school, like there’s a proper Lotus twin-cam up front. It’s easy to make use of it with the notchy shifter too, and the clutch is light enough to slice through changes as quickly as your limbs will move. The brakes need a hefty shove (despite an upgraded master cylinder in this car) but they’re as instinctive to modulate as every other control.

This optioned-up Super Seven 1600 is not dissimilar to the old three-cylinder Seven Sprint in visual terms. The cycle fenders more typical of modern Caterhams have made way for long, flared mudguards, the Seven numeral is missing from the front grille, and the dinky 14-inch Minilite-style wheels are wrapped in 175-section front and 185-section rear Avons.

Climbing inside is like stepping into a Gucci handbag thanks to all the white leather and polished metal, only less spacious. Dropping past the wood-rimmed Moto-Lita wheel is a squeeze for those larger of frame, but pedal room aside it’s surprisingly comfortable once you’re installed thanks to the well-padded seats and straight-legged driving position. The white leather dash is pockmarked by twinkling Smiths gauges and is branded on the passenger side with the Super Seven 1600 script. 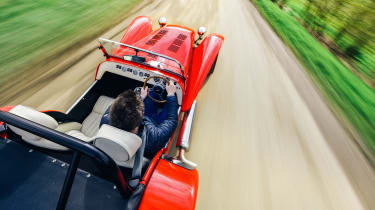 Every drive in a Seven is an event, and not just because stowing or erecting the optional roof according to prevailing conditions requires an entirely new skill set unrelated to the act of driving.

The sensations of this car are particularly bright and clear because the skinny tyres, larger-than-standard steering wheel and road-biased suspension take away some of the effort required with the track-focused cars with which we’re more familiar. A flex of the fingertips is all it takes to nudge the nose off the straight-ahead, while cambers and bumps pull gently at the wheel rather than yanking it hither and thither.

It’s an object lesson in chassis balance too. The front tyres don’t hold on forever, but judging the right speed is easy thanks to the messages relayed through the wheel, and once everything has hooked up, any application of the throttle whatsoever sets the Seven into a wonderfully neutral stance, squirming on its Avons, itching for your next input.

That’s usually an extra squeeze of the gas, but with relatively little to call upon and body roll taking the weight off the inside rear tyre, the Seven will reward you with only small angles on the exit of corners. It’s still a satisfying feeling, but like the old Sprint and SuperSprint there’s greater reward in tidiness, revelling in the verge-skimming accuracy and the way every road seems to be twice its normal width.

The issue, as it was with the Sprint and SuperSprint, is price. The Super Seven starts at £33,495, and specified as this car is, you’re looking at nearly £40,000. Those Birch white seats come in at £1000 for instance, the weather protection £2250, and even those gold-coloured alloys are a £600 option.

The trouble is, the lower price is around £6000 more than that of the similarly motivated Seven 270, the latter considerably more than a 2-litre Seven 420. Performance isn’t everything, but most will find a regular 270 no less exhilarating than the Super Seven – and at £28,990.

If you value the drive more than the style, it’s hard to make a case for the Super alongside the 270 in particular. But if you do dig the retro vibe, the car it’s attached to is as brilliant as ever.