The choice here is wide but broadly revolves around three engine variants, a 660cc turbocharged Suzuki three-cylinder, and naturally-aspirated 1.6- and 2-litre Ford four-pots in various states of tune.

The entry-level engine in the Seven 160 comes from Suzuki. An unusual choice? Perhaps, but the diminutive K6A engine has been used in Suzuki’s cars for decades so it’s a proven design, and its tiny size and affordability make it a natural choice for the basic Seven. It produces 80bhp, which doesn’t sound like much these days but feels healthy enough in the Seven, giving 163bhp per ton. The SuperSprint features a tuned version of the unit making 95bhp.

If you want proper power though, the rest of the range can provide it. Next up is a 1.6-litre Ford Sigma four-cylinder, making 135bhp in the Seven 270 and 152bhp in the Seven 310 and developing a suitably sporting blare as they race towards the red line. The 2-litre Ford Duratec-engined models are rampant, with 180bhp the entry-point in the Seven 360, rising to 210bhp in the Seven 420 and, fitted with a supercharger, 310bhp and 219lb ft of torque in the 620R. 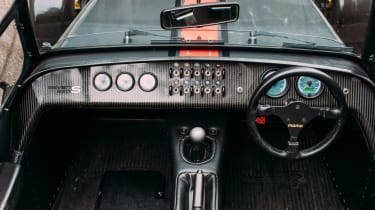 Caterham fits the latter model with a six-speed sequential transmission – probably just as well, as while the Seven’s manual gearboxes are as tactile as transmissions get, we doubt our arms could move fast enough to change gear manually in the 620R.