“Purposeful” is perhaps the best description of the Seven’s styling. We think it looks great, but at the same time it’s fair to say it’s not a conventionally attractive car. Oddly, it doesn’t look as old as the 60 years of its basic design, but perhaps that’s down to the car’s gradual evolution – or perhaps we’re just so used to the way it looks that the styling has taken on a completely timeless quality, not unlike that of the Land Rover Defender or the overall shape of a Porsche 911.

That said, Caterham did offer a heavy rose-tinting package for your spectacles when it launched the Sprint and later the SuperSprint – stick an age-appropriate numberplate on either of these and it’ll take a connoisseur to realise they don’t hail from some time in the 1960s. 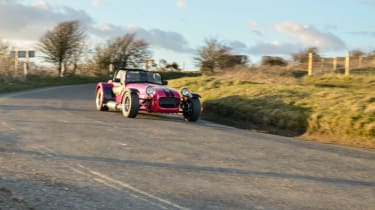 Other Sevens embrace modernity by way of fat tyres, aggressive alloy wheel designs, bright colour schemes and optional splashes of materials like carbonfibre. There’s certainly appeal in the design from a pure engineering standpoint too, as few vehicles short of an Ariel Atom give you such a clear look at their basic mechanicals.