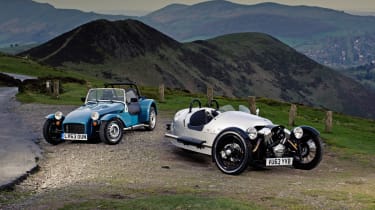 Our latest track battle sees the Caterham Seven 160 take on the Morgan 3 Wheeler at Mallory Park.

The pair of British sports cars look underendowed on paper, sharing just five cylinders, seven wheels and less than three litres of engine capacity between them. But with bags of character and half the mass of your average city car, they can punch well above their weight when it comes to sheer grin factor.

The Caterham Seven is a very familiar face. In production for more than 40 years now (longer if you look back to its Lotus Seven forebear), ‘Seven’ has been a byword for basic sports car fun for a long time now. Sold as either a kit car or fully built, and with all manner of engines that take its performance from beginners’ level to Bugatti Veyron-rivaling acceleration figures, it’s as famous for its flexibility as its fun.

The 160 model is the new entry point into the range, and for the first time a factory Seven gets a turbocharger. A dinky 660cc three-cylinder turbo comes from Suzuki, serving up 80bhp and 79lb ft of torque – power akin to a VW Up. A wee 490kg kerb weight ensures performance is still brisk, though, 0-60mph taking 6.5sec. While a 100mph top speed won’t win games of Top Trumps, it’s clearly more than enough to have fun on British B-roads – especially when you consider the modest grip of its tyres. Prices start at £17,995.

The Morgan 3 Wheeler is as quirky as its name suggests, with two skinny 19in wire wheels up front and a fatter, single driven wheel at the rear. Strapped to the front, causing havoc for the handling balance, is a V-twin motorbike-sourced engine delivering 80bhp and 103lb ft. At 525kg the Morgan is the heavier of our pair, yet its 0-60 time is quicker, at 6.0sec, and its top speed 15mph healthier. It’s pricier, at £30,000.

Of course, there’s one very visible factor that ensures their dynamic behaviour is contrasting, and a fascinating track battle is ensured. Which is quicker? And perhaps more pertinently, which is more fun? Video above…