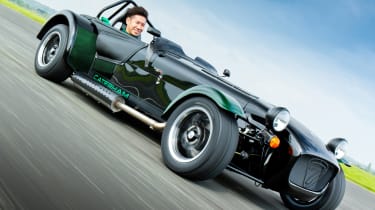 Caterham has unveiled a new special edition Seven model, designed by Caterham F1 team driver Kamui Kobayashi. Based on the existing 250R model, Caterham has added bespoke features to the model, picked by the driver for the Japanese-only export model.

Powered by a 1.6-litre Ford engine, the new model produces 125bhp as standard – hitting 62mph in 5.9secs and topping out at 122mph. Kobayashi has worked with the manufacturer to add his own unique styling tweaks to the model.

The main body is painted in black with a matt black central stripe, and features a single-seater arrangement, complete with an aluminium tonneau cover. A single roll over hoop adds to the single-seater vibe. Both front wings and rear wing protectors are made from carbon fibre with Caterham Green-infused lacquer - a first for a Caterham road car. This same colourful material is used for the main dashboard panel inside the car

There are various other details around the car, like the ‘Kamui’ logo on the gauge inlays, seat head rests, green gear knob and special anodised green key, that identify the F1 driver’s involvement. A set of 13-inch diamond cut black wheels complete the visual transformation.

With just ten models being sold to Japan, the exclusive special edition Seven is set to cost six million Yen, or around £34,950.