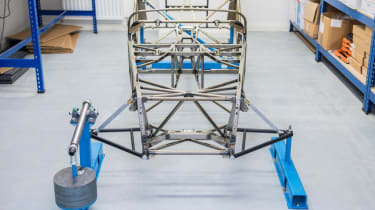 Using butted tubing technology – a process developed by Reynolds as far back as 1897 – the trio of British companies has been able to reduce the weight of a typical Caterham Seven chassis by more than ten per cent. On a car where every kilo counts, the ability to shed ten per cent from one of the heaviest components is an impressive feat.

It’s all about where weight can be lost without compromising structural strength: With butted tubes, that means building tubes that are thicker at the ends than in the middle, and using mild steel rather than ‘more exotic alloys’. Some individual components are up to 50 per cent lighter, without any reduction in stiffness or strength.

The downside of the more advanced engineering is cost, and Caterham estimates that it would add between £1000-2000 to the price of a Seven – though that’s also a premium it thinks up to a fifth of buyers would be prepared to pay for as an option. 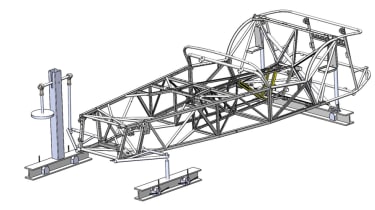 The prototype was developed virtually by Simpact, after which Caterham built a full car using tubing provided by Reynolds. ‘There is a real synergy between customers of Caterham and cycling enthusiasts’, explained Simon Lambert, CTO of Caterham Cars. ‘So it’s even better that the technology that has made this possible has come from the two-wheeled world.’

Caterham has confirmed it will continue to develop the prototype vehicle, with a production version possible ‘in due course’. It also notes that research and processes undertaken in this project have use for other companies using spaceframes – so such technology could become a feature in other lightweight sports cars in future.

Mercedes-Benz reveals tech offerings of the next S-class, ahead of its launch later this year
Visit/aston-martin/21621/first-ps275m-aston-martin-db5-goldfinger-continuation-model-produced