It’s always a good sign when the slowest car in the range can reach 60mph in under seven seconds, and the Seven 160 manages that in 6.9. Top speed is very much limited by 1950s aerodynamics (in all models, though it’s most apparent in those with the least urge), meaning the 160 can only reach 100mph – though to be fair, a hundred in a Caterham feels perfectly brisk.

As with everything about the Seven, it’s the delivery and feel of that performance that matters as much as the numbers. The 160 is brisk, but stops well short of the terrifying pace of the fastest Sevens. The little Suzuki engine doesn’t have the throttle response of its stablemates even though its turbo is tiny, and it’s less keen to rev than the fours too, though a healthy mid-range means you can travel quickly enough without breaching the rougher reaches of the rev counter. 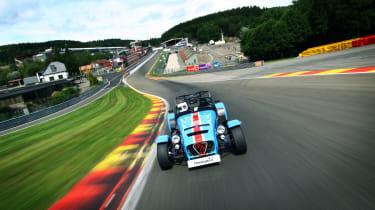 The Ford four-cylinders rise in excitement proportional to their on-paper numbers. The evo team is split on just which variant is most satisfying to use, but all share throttle response seemingly hard-wired to your brain, and a willingness to bat into the rev limiter in every gear. The 310 is undoubtedly the pick of the 1.6s, delivering seriously quick performance without it feeling overdone for public roads, and it emits an engagingly raucous note as you race through the gears.

The Duratec models are all seriously fast and by the time you get to the 620R there’s barely enough time to blink, so quickly do numbers show up on the speedometer. Even the 420 has an ungodly turn of pace, and after our old Fast Fleet long term 420R was fitted with a set of individual throttle bodies, it instantly became the best-sounding car on the fleet.