Light weight, a stiff spaceframe chassis, a front-mid engined layout, a low centre of gravity, rear-wheel drive… simply by looking at the car’s on-paper characteristics you know it’s going to be good, and true to form the Caterham remains one of the great drivers’ cars, decades after Colin Chapman first introduced the Lotus Seven way back in 1957.

That low weight influences virtually everything that makes the Seven great. Basic Seven 160s dip under the half-ton mark at 490kg and no other Seven weighs more than 575kg at the kerb. Even though the Seven is narrow by the standards of most cars, it’s wide for its height and combined with great front-to-rear balance and, if selected, sticky tyres, the car’s grip, ability to change direction and the space it gives you on the road are pretty much unrivalled among regular road cars.

You direct it through a quick, unassisted steering setup and a tiny wheel, meaning the smallest of movements have a large outcome and all but the tightest of turns can be dismissed with the flick of a wrist. The steering bombards you with feedback, but so tiny is the Seven’s frame that you feel as much about what the car is doing through the seat as you do from the wheel – and perched above the rear axle, you’re perfectly placed to detect changes in the car’s yaw. Only motorcyclists and single-seater racing drivers are granted more two-way communication between pilot and chassis. 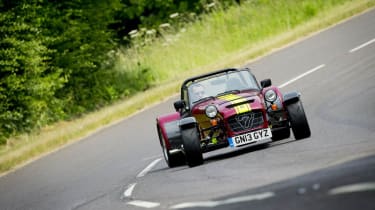 The Seven’s ultimate behaviour does depend on which model you go for, which gives the wide range of variants Caterham offers surprisingly different characteristics. The basic, live-axle 160 on its narrow tyres feels very much like driving a particularly well set-up classic, without the power to really excite the rear axle in the same way as its stablemates, but a wonderful front-to-rear balance and relatively low grip that lets you pull off tiny four-wheel drifts at satisfyingly sane speeds.

At the other end of the scale, Caterham’s R models on near-slick Avon tyres grip tenaciously but give you more options when it comes to altering your cornering line with the throttle. Models in between do a bit of both, so choosing the car that best suits your driving style requires little more than the right budget and deciding just how fast you want to travel.

The Seven’s ride quality is better than you’d expect, as the ultra-light chassis allows a softer spring rate than you’d normally require for such cornering performance. It’s never less than firm in any Seven, but the car’s small size means you always have the option of avoiding rougher sections of road altogether.