There’s not much interior to speak of in a Seven, but the biggest concern you’ll probably have is whether you even fit. Caterham does offer different seat options and perhaps more pertinently, a large SV frame is still available for particularly tall drivers, but it’s certainly not a car for the broad.

Next, you’ll want the roof off. It’s handy that Caterham supplies one, but it makes getting in and out a considerable faff, it’s fiddly to erect or stow, it makes the cabin a claustrophobic place, doesn’t really make it a great deal more weatherproof, and frankly it looks a bit crap too. A better bet is the recently introduced ‘shower cap’ roof that leaves the rear of the car open but can be erected or lowered in a matter of seconds; unlike the full roof, which takes minutes and the skin off your knuckles. Ultimately, for wet weather driving we'd recommend warm waterproof jacket and a healthy sense of adventure.

The doors are worth using if you intend to drive your Seven without a helmet, mostly because the car’s unique shape turns the interior space into a vacuum above a certain speed and actually makes it quite difficult to breathe. 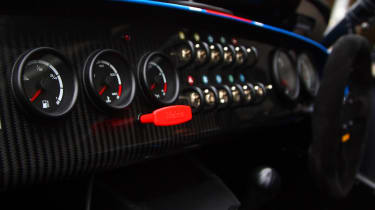 The rest of the Seven’s cabin is as simple as they come. You can option a heater and a heated windscreen as mild creature comforts, and if you’re in a racy mood then the fixed-back bucket seats with harnesses ramp up the race-car feel – though they do make getting in and out even more of a chore. The dashboard is pretty much a board (albeit made from carbonfibre in some models) with instruments strewn about its surface, and you’re hemmed in by the transmission tunnel to one side and the chassis to the other.

Pedal room is tight, but once you’ve got the knack they’re just right for heel-and-toe and their short actions complement the tight gearshift and rapid steering. And if you are the right shape for a Seven, then you might even find it surprisingly comfortable inside – though some of our testers complain about the lack of elbow room for changing gear and working the wheel.