Caterham has revealed two new e-bikes, and an off-road motorcycle as part of its new business plan to diversify. Pictures and details here 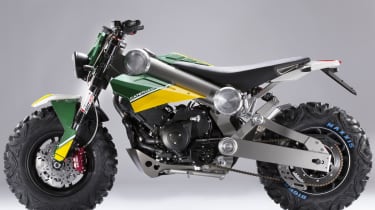 Caterham has released information and pictures of the company’s new e-bikes, the first part of the company’s plan to diversify its range with its strategy of ‘growth through intelligent partnerships’.

Three new prototype bikes were revealed at the International Motorcycle Exhibition in Milan. First up is the Brutus 750, a creation Caterham is calling the SUV of motorcycles. It is road legal however, and features what Caterham claim is the first motorcycle to feature an automatic transmission. Production is pegged to start in spring 2014.

The other two are electrically assisted push bikes are will feature the latest electric bike technology, and lightweight carbon fibre frames. The carbon e-bike is said to be inspired by F1 technology, while the Classic e-bike features retro styling.

This is of course just part of the overall plans for Caterham. During a recent interview with evo, Caterham boss Tony Fernandes said: ‘Caterham can’t survive with just a sports car model line-up. We have to do a lightweight, fun hatchback car and a crossover of some description. How we make these true to Caterham values is what we’re grappling with right now.’