Caterham Seven 310R review – How does the most powerful 1.6 fit in the Seven range?

Can a subtle new look and more power transform the old 270R? 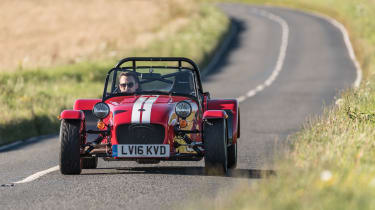 Can you see the difference with this new Caterham? Look closer. Still no? Ok, it’s the lights; the new 310R is the first Caterham to be offered with these optional LED headlamps. It’s not just the lights that are different though, however the other changes are ones you can’t see; the 1.6-litre, four-cylinder engine has been lightly tuned to increase power by 17bhp.

The Caterham ethos of simplicity, lightweight, no-nonsense driving contradicts the idea of ‘technical highlights’. There’s no active torque vectoring here, no brake steer, no traction control and not even ABS.

The 310R is equipped with the 1.6-litre Ford Sigma engine that we’ve tried in the Caterham 270. However, Caterham have released a bit more power from the 1.6 by adding some more aggressive cams and remapping the fuel and ignition. It’s the same modifications that Caterham make to the engine to promote a car from its Tracksport race series to the Supersport category. The changes increase the power by 17bhp to 152bhp while weight stays the same as a 270R at 540kg. That means that with 250bhp/ton the 310R is able to reach 60mph from a standstill in just 4.8secs.

The engine itself has the recalcitrant nature of a proper competition engine as it doesn’t like to idle, especially when it's cold, and isn’t suited to being used at a lower rpm. It also gains and loses revs just like a race engine.

It sadly doesn’t sounds like a full-on race car though, as it lacks that hard-edged induction scream that make the best highly-strung, naturally aspirated, four-cylinders sound so incredible. Instead you hear the parpy noise emitted from the exhaust just two feet from your ear.

At high speeds and high revs you hear nothing from the engine. Instead the high-pitched whine from the six-speed gearbox and rear axle dominates. As the revs go up, and the speed increases the noise gets significantly more severe. Then the shift lights flash and you go for another gear expecting a small break in the intensity. But the ratios are so closely packed together that the revs barely drop and you never get the opportunity to recoup. It’s phenomenally exciting and so addictive. 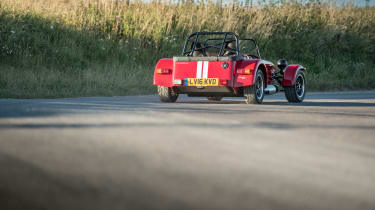 It can take a while to acclimatise to a Caterham. The cramped interior, the tiny steering wheel and the narrow pedal box can be off-putting initially. But after a while the awkward ergonomics become natural and even the hard seats, that only have patches of carpet instead of padding, feel comfortable.

After it starts to feel familiar you can then appreciate the incredible amounts of feedback the 310R offers. The steering is so quick that navigating fast corners can almost be done with the power of your mind; a tiny tweak of the wheel is all that’s needed. It transmits so much information to your hands too; you know immediately when you’re getting close to the front tyre’s limits. The unassisted brakes, with no ABS, are also so clear – its easy to feel when the front wheels might lock so you can brake hard right up to the point where the tyres will give way. Seeing the front wheels turn and bounce up and down might not actually help, but it gives the feedback more clarity.

The 185/55 13” Avon ZZS tyres might well help make the front end so communicative and progressive, but they also give the rear axle a significant amount of grip. Too much grip for the 310R to have the any-time, any-gear throttle adjustability that the more powerful, Duratec-engined Caterhams have. If you’re much more committed to a corner, which is possible if the environment is right thanks to the excellent front-end, then the rear axle will move around a little more. Brake deep and late, and carry a touch too much speed into a corner and the back axle will be coaxed into a slide with a lot of throttle. The quick steering does mean it’s easy to catch, and it’s undoubtedly very satisfying, but the 310R doesn’t writhe around like you might expect of something so extreme.

The 310R is certainly exciting but it’s a more delicate proposition than a 420R, and sadly its quest for more grip has removed some of the fun. The Caterham’s old-school feel, noise and look don’t suit the modern car levels of grip. The 310 has great performance, but is slightly too tied down to give the slightly unhinged, hold-on-tight, scream-if-you-want-to-go-faster sensations that makes the very best Caterhams so thrilling.

The cheapest you can buy a Caterham 310 for is £21,995, but for that you’d have to build it yourself. It only costs an extra £3000 to have the factory build it for you; that might seem like a lot, but building a Caterham is no mean feat and requires more time and more patience than you’d think. We know, we tried it.

If you want to turn your standard 310 into a 310R, it’ll cost you £3995. The R pack does add the Avon ZZS tyres, which might not be such a great thing, but a lot of what else comes with the pack seems essential. You get an LSD, a lightweight flywheel, a rear anti-roll bar, shift lights, sports suspension and the composite race seats. Sadly the close-ratio, six-speed gearbox is another £2500, and you wouldn’t want to say no to that.

>Click here to read our review of the Caterham Seven range