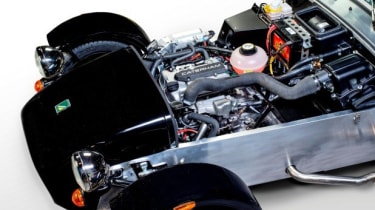 Caterham's new entry-level Seven will be powered by a 660cc three-cylinder turbo engine. The British sports car firm is 40 years old in 2013, and the back-to-basics Seven – which ‘harks back to the philosophy that inspired its creation’ – will be launched in Autumn, its exceedingly dinky engine sourced from Suzuki.

It’s set to cost less than £17,000, undercutting the 125bhp Roadsport – currently the cheapest ready-built Seven – by over £3000. With the smallest engine yet seen in a Seven a 1.4-litre K-series unit, this is a radical switch to something less than half that size.

Called the Seven 160 in the UK, the car's name refers to doubling its power output (the same notion applied to the monster Caterham 620R's name), which is 80bhp. That's less than most superminis, but will be more than enough to move a 500kg Caterham at a decent pace.

The turbo engine will be linked to a Suzuki five-speed gearbox, with Caterham adapting it for its switch from tiny Japanese kei-car to hardcore British sports car. The new Seven will also gain 'a re-engineered chassis, which also harks back to the spirit of former Sevens with major revisions to the suspension layout', according to Caterham. Sharper turn-in thanks to the engine's miniscule weight seems a given.

Caterham CEO Graham Macdonald said - 'Suzuki is a leader in producing compact vehicles with extremely efficient engines and that is clearly a shared passion. We needed a particularly light powertrain but it had to be a unit that suited the characteristics inherent to all Sevens - thankfully, after lots of hard work, we have a package that works brilliantly. Our intention for this car is to offer the joy of the Seven in distilled form, so the new entry-level car is lighter, cheaper, more economical and more accessible than ever.'

Caterham had previously teased this car's powertrain, with expectations centring around Ford's 1-litre turbocharged petrol Ecoboost seen in the Ford Fiesta and Focus, with 123bhp, which had previously been trialled in a Seven. It can be wound up to 145bhp with a simple chip, too. Another possibility was Renault's 0.9-litre turbo triple used in the Clio, a rumour born from Caterham and Renault's sports car tie-up. If this first turbocharged Caterham is a success, these could still be options for different models further down the line. Downsizing will apply to the Caterham’s mechanical components, but its already stripped-out interior should remain unchanged while the first teaser shot suggests no change in the model’s classic styling, which is derived from the Lotus Seven which the late Caterham founder Graham Nearn acquired the rights to build in 1973.

The Caterham Seven 160 starts production in January 2014, with first deliveries the following spring. It will be called the Seven 165 in Europe, its '5' tag referring to the Euro V engine regulation compliance that allows it to be sold on the continent. It also means the new entry-level Seven gets its grand unveiling at next week's Frankfurt motor show.