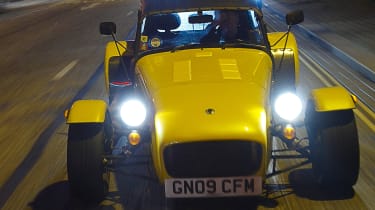 Powered by the same 175bhp 2-litre Duratec motor as the Superlight R300, the Roadsport 175 may seem like an odd addition to the Caterham range at first glance. Yet while the differences are small, they greatly alter the character of the car, particularly if you opt for the wider SV-bodied version you can see here.

For a start the Roadsport does without the ultra-short-ratio six-speed gearbox and instead uses a more generously spaced ‘five’. The result is more relaxed progress that exploits torque rather than frenetic top-end power, and the suspension set-up reflects this, nicely hitting the spot between full attack mode and comfortable cruising. You also get padded seats rather than racy bare-shell jobs, and ‘luxuries’ such as a heater and a heated windscreen.

If you plan to use a Caterham on a day-to-day basis then the Roadsport makes for a less compromised companion while still being fast enough across the ground to see off any regular four-wheeled mode of transport. On a circuit you’d be soundly thrashed by an R300, but if you’re not the type of driver who regularly uses race tracks, who cares?