Superchips has upped the Ford Focus Ecoboost's 1-litre engine so it now beats a Bugatti Veyron (sort of). Review here 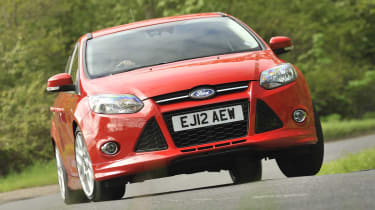 A Superchips remap for the Ford Focus Ecoboost. The £455 modifcation lifts the Focus’s 1-litre three cylinder engine from 123bhp to 145bhp, and comes complete with a 12-month/30,000-mile warranty.

It’s a relatively simple remap, and is applied via Superchips’ Bluefin handset which is posted out when you buy the upgrade. This means the map can be removed and reapplied as you please.

The 22bhp-healthier power figure arrives at 6100rpm, but more key is the 42lb ft-higher torque figure. The Focus’s new 167lb ft maximum is on tap from 2600rpm – nearly 500rpm lower than the regular Ecoboost’s peak torque, a stat which bodes well for driveability.

The regular Focus Ecoboost is a very good car. Its lightweight engine ensures a sharper front end and better agility than standard, while the three-pot is far more refined than its diminutive size and cylinder count might lead you to believe.

This Superchips upgrade does little to change that. The engine’s impressively linear delivery remains, the rev-counter’s needle simply sweeping round the dial quicker than before. It takes back-to-back drives with and without the map applied to really tell the difference, though. Flexibility and throttle response are improved, but there are no fireworks. It remains a car with unexpected cruising refinement (thanks in part to a long-legged six-speed manual transmission) and a pleasing turn of pace and burbling soundtrack when you drop a gear or two.

It’s a subtle remap, but one which is excellent value at £455, especially as the regular Focus Ecoboost's fuel economy shouldn’t be dramatically affected. That’s a claimed 56.5mpg, but we’ve never topped 42mpg while driving 1-litre-equipped Focuses…

With 145bhp/litre, this Superchips Focus boasts a bhp-per-litre figure better than a Bugatti Veyron. Yet the Ecoboost unit takes an extra 22bhp so easily, we know it can accept more to create a proper warm hatch (in fact, a 202bhp Ecoboost three-pot has just lapped the Nurburgring). Fingers crossed we get to try something sportier soon.