Ford shows off at the Ring with a new road-legal Formula Ford single-seater, powered by a tuned version of the three-cylinder turbocharged EcoBoost engine. 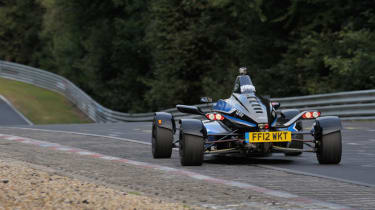 A car with a 1-litre engine has set one of the fastest Nurburgring lap times. It’s no normal car or 1-litre engine, however. It’s a one-off road legal Formula Ford race car packing a tuned version of the Blue Oval’s 1-litre Ecoboost engine.

Its 7min22sec Nordschleife lap puts the Ecoboost 11th in the list of fastest ever times. That’s better than the quickest recorded times by the Lamborghini Aventador and Pagani Zonda – cars whose engines are more than six times the size of the Ford’s. It’s also faster than any time yet recorded by a three or four-cylinder car.

The three-cylinder turbo unit – currently used in the Focus – has been modified from 123bhp to 202bhp, yielding an estimated 158mph top speed and sub-4sec sprint to 62mph in the diminutive Formula Ford.

The Formula Ford racer was modified for ‘road legal’ status via wheel covers, lights and indicators, wing mirrors and a horn. It also uses a regular six-speed manual gearbox and road-legal tyres. The headline-grabbing lap was completed by British racer Nick Tandy.