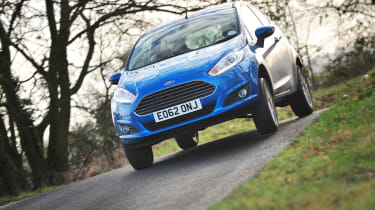 The Ford Fiesta Ecoboost, with the Blue Oval’s new 1-litre three-cylinder petrol turbo in its top state of tune. There are 79bhp and 99bhp versions of the lightweight 1-litre available too, but it’s the 123bhp one we’re testing here in this facelifted, 2013 Fiesta. It enables a 0-62mph time of 9.4sec and a claimed top speed of 122mph, giving the car all the makings of a bit of a sleeper. It costs from £15,445.

The engine punches out a very healthy 123bhp and 125lb ft of torque in its top state of tune, with 148lb ft available for up to 30 seconds on overboost. Ford’s 2-litre petrol engines were rated at 130bhp and 130lb ft just ten years ago, which gives you some idea of the progress the company has made with engine technology.

Sony DAB audio is standard, as is aircon, Bluetooth and the programmable MyKey system, which allows parents to restrict things like top speed, audio volume or the ability to disable ESP when the car is started with their child’s key.

The Fiesta is also the first Ford available with the new automatic Powershift transmission, which features a dual dry clutch system - a first for Ford. It's officially 8mpg down on the manual version, although claimed 0-62mph remains an identical 11.2secs for the 99bhp variant.

Bring the three-pot engine to life and its sound is more refined than a Fiat or Alfa Romeo TwinAir’s off-beat warble. As you move away it’s obvious that this is indeed a very refined unit, comparable to the best four-cylinder engines out there. I’m pleasantly surprised by the amount of urge available too. Spinning up the turbo is absurdly easy and you revel in the instant surge of torque.

Our test car is a Titanium version, which is a shame, as this engine is also available in a Zetec S model that gets sports suspension and sports seats. But the ride and damping here are still class-leading and a world away from the choppiness of a Mini or a Fiat 500. The steering is very direct too, although little information about what’s happening at road level makes it through to the wheel. Brake feel isn’t great either, with too much pedal travel; the brakes also fade quickly when pushed, which might be down to the rear being fitted with drums.

But it’s the feisty engine that dominates affairs, and as you spin it towards its 6500rpm limit, a delicious three-pot growl fills the cabin. Driven like this, though, economy takes a dive and I only averaged 33.5mpg over my regular commute – barely half the claimed 65.7mpg.

Customers seeking the automatic Fiesta Powershift will be glad to hear that the auto ‘box responds quickly from a standstill, providing instant urge that makes city driving a joy. Like the manual, there’s also a fantastic sense of just how torquey that little 1-litre engine is. There’s a distinct lack of steering wheel paddles, and although you can manually flick up and down the gears using a strange gear selector-mounted rocker switch, there’s little point.

When up to speed the Fiesta Powershift feels significantly more lethargic than the manual, despite what the performance figures might suggest. If left in D, or even the slightly sharper S mode, B-road progress requires thought akin to driving a laggy 1980s turbo. Bury the throttle on the way into a corner to ensure it is in the right gear and delivering some performance on the way out.

Holding it in gear manually does help this to some extent, but the pause between pressing selecting a gear and the actual change quickly becomes tiresome, causing us to simply leave it in Sport.

This is where the Fiesta falters a little, its price tag placing it above small hot hatches like the 134bhp, £13,749 Suzuki Swift Sport and against premium rivals like the 118bhp, £15,080 Citroen DS3 and 120bhp, £14,900 Mini Cooper. The chassis is terrific and this new engine is a belter, but at this price the feel-good factor from the rest of the car should be better.

The availability of this Ecoboost engine spells the end for the old 118bhp 1.6-litre Fiesta Zetec S, a car previously ran on the evo Fast Fleet and which can be tuned to 155bhp by Mountune. Used examples can be bought from £7000.