First drive in Mini's new Soho special edition, a Cooper with extra kit and a new splash of paint 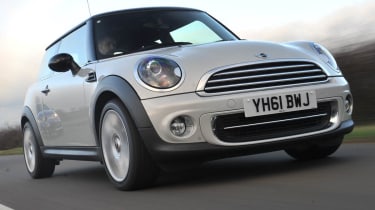 What is it? The Mini Cooper Soho, a special edition of the unashamedly retro hatchback. Available on Cooper hatchbacks and convertibles, prices kick off at £16,765. Technical highlights? There’s nothing new under the skin, the standard Cooper’s 120bhp 1.6-litre naturally aspirated petrol and 110bhp 1.6-litre turbodiesel options and sweetly simple front-drive chassis untouched. Instead, the Soho is a paint’n’kit job – a new White Silver colour scheme on the outside and 17in Black Star Bullet alloys (not on our test car, which was fitted with winter tyres), Bi-Xenon headlights, a leather sports steering wheel and plusher interior trim migrating from the options list. What’s it like to drive? Being identical mechanically to standard Mini Coopers, it’s one of the most fun superminis you can buy. Compared to Mini’s faster hatches, the ride is supple and composed, while the steering is light but pleasingly direct. It’s an easy car to maintain momentum in and drive cross-country for long periods without ever having to scrub off significant speed. Good job, as acceleration from this petrol Cooper’s non-turbo 1.6-litre engine is certainly modest. That’s not to say wringing its neck isn’t fun – the shift action on its six-speed manual gearbox is positive and satisfying, while there’s a nicely rorty (if unmistakably four-pot) noise at higher revs – but you can’t rely on the turbocharged torque of faster, forced-induction Minis. The Cooper D oil-burner has more low-down torque while serving up 74mpg fuel economy and zero road tax and congestion charge thanks to its 99g/km CO2 emissions. It’s nearly £1300 costlier, though, starting at £18,045. How does it compare? Warm hatchbacks are pretty abundant, and the Mini has to tackle lots of capable cars. The Suzuki Swift Sport and Renaultsport Twingo Cup cost less than £14K and are more fun to drive, but completely lack the premium feel of the Mini.  The Audi A1 and Citroen DS3 are its closest rivals if style pleases you more than substance, but neither can satisfy the driver like the Mini has for over a decade now. Just bear in mind that Soho trim is a slightly expensive route to new paint and flasher alloys. Anything else I need to know? Mini’s philosophy is to name its special editions after ‘London boroughs, districts, streets and landmarks’. We’ve seen the Hampton and Pimlico before this Soho, so brace yourself for the Dulwich, Clapham and Dagenham. Maybe.