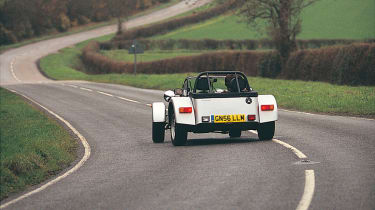 When Longbridge shut last year there were ripples. One of these was the end of the K-series engine – a ripple that was more like a large wave for Caterham. The company has been installing K-series engines in its Sevens for the last 15 years, during which time it has rather become part of the establishment. Caterham bought up stock left, right and centre when Longbridge closed, but with that stock about to run out, here comes the K-series replacement: the 1.6-litre Ford Sigma.

The Sigma is an engine early in its life, so it should see Caterham through many years to come. In its original form it puts out 100bhp, but through retarding the inlet cam Caterham has boosted power to 125bhp at 6100rpm, or 10bhp more than the output of the K-series it replaces. Other, more powerful versions are on the way.

A dry weight of 90kg makes the Sigma a useful 10kg lighter than the K-series, but the really key improvement is its torque. The K-series peaked with 107lb ft at 3000rpm whereas the Sigma holds significantly more than that from 3000, peaking with 120lb ft at 5350rpm.

The new engine has also arrived just in time for the 50th anniversary of the Seven, so Caterham is launching it with two new gold-nosed paint options (at a cost, naturally) to celebrate. Our silver car looks fantastic, but as you climb inside the tiny cabin you don’t need the anniversary paintjob to appreciate how long ago this car was conceived. To eyes that have become accustomed to the ‘modern’ view over the nose of a CSR, the narrow track of the Roadsport seems wonderfully old-fashioned and is matched every inch of the way by the comically skinny Avons.

Twist the key and the new engine burbles encouragingly into life. Blip the throttle and there’s a good, rich sound coming from the exhaust that now snakes along the driver’s side instead of the passenger’s. It’s a deep sound too – almost at odds with the car’s diminutive dimensions – but this characterful engine note is all-important. Whether you’re out in a T-shirt on a summer’s evening or scarved-up on a crisp winter’s morning, it’s imperative you have the right sort of soundtrack to your motoring idyll.

There are just five speeds in the ‘box, but as you knock the smooth aluminium ball between ratios it’s as tight and precise as ever. With this amount of torque on tap you never miss a sixth cog either. Far from having to thrash the nuts and bolts out of the Sigma unit, you can use its broad torque band to make the Roadsport really flow. Then when you want to extend the engine through the last 2000rpm, the note hardens and you’ll find that even a basic Caterham is much faster than most things on the road. It’s also fun to run into the 6750rpm limiter, just occasionally, to hear the fantastically percussive barp-barp-barp.

The tiny disc brakes give good initial bite but then feel slightly as though they’re running away from you until the point of lock-up; in the wet you might choose to use engine braking to help out.

All Sevens now have the new ‘metric chassis’, which is welded by robots and comes with the bonus of being 12 per cent stiffer. The bottom line remains the same, though: the narrow-bodied Caterham is fantastic fun. It will enliven any journey and teach you all you could want to know about balancing a car. Autumnal conditions mean that 125bhp is plenty to keep things entertaining too, especially in a car wearing 185/60s front and rear. Lean into a corner, the front wheels steering no more than a fraction, feel the back edge naturally round and then smile as the whole car moves across the surface in a wonderfully neutral slide. It doesn’t feel like you’re taking a liberty, it’s just the way the car wants to be driven.

The future is looking bright for Caterham. Prices for the Roadsport 125 will remain the same as for the old 115, meaning all this could be yours for just £15,995 if you’ve got a garage and a big enough tub of Swarfega (£2500 more if you haven’t). 2007 looks like being a golden year indeed for the Seven.