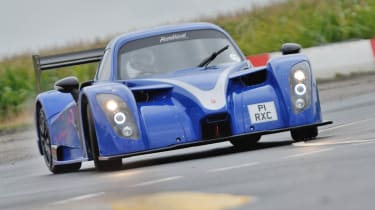 The Radical RXC, the Peterborough sports car maker’s first closed coupe. It’s designed with a bigger bias to road driving than any of Radical’s more hardcore efforts, though with its Le Mans car styling and operation of its 3.7-litre V6 engine via a sequential gearbox, it is still very much at home on the track. Priced from £107,500, we’ve tested it around the UK’s challenging Blyton Park circuit in Lincolnshire.

Pull up the gullwing door, sit on the wide side pod and then slide down into the Corbeau seat. Above your head there’s the criss-cross of roll-cage, ahead a tiny suede-covered steering wheel complete with controls for indicators, lights and windscreen wipers. Poking out from behind the wheel you can just make out the two copper-coloured paddles that operate the seven-speed Quaife gearbox. To the left is a big central display that lights up with a sweep of rev-counter across the top, a prominent gear selection read-out just below it and a digital speed reading closest to you. This is a prototype car in its barest trackday trim.

The view out through the visor-like windscreen and over the Le Mans-inspired bodywork feels very special indeed. The RXC also sounds thunderous and has niceties such as air con and adjustable assistance for the power steering. A 2.8sec 0-62 time is identical to the McLaren P1, though the Radical's 175mph is somewhat lower than its British supercar 'rival'.

I’d expected the RXC to be rabidly fast, darty and seriously hard work, but my expectations are confounded within a lap. It’s a quick car, but 350bhp (production cars will have 380bhp) in around about a ton will never match the insanity of something like the Caterham 620R, so the brakes, the quality of the drivetrain and the sheer grip and balance take centre stage instead. There’s no ABS here but I love the six-piston brakes – the pedal is solid but there’s just enough travel to feed back intimate information about the available grip. It means you can attack braking zones with astonishing accuracy, helped by the lovely downshift quality and the RXC’s wonderful stability. Furthermore, the aerodynamic grip through Blyton’s fast esses, Port Froid, is mind-bending: you can turn in flat, just waver on the throttle, then pick it up again and carry tremendous speed through to the exit.

It’s not just the cornering grip that’s impressive. The limit isn’t a sharp ledge like you might expect and the RXC can be driven with plenty of slip angle without biting. Perhaps there’s a shade too much understeer around the slower corners but that can be dialled out with the adjustable roll bars and dampers. It’s a real trackday weapon, this.

It’s deeply impressive and the gutsy V6 feels unburstable, giving the car a really appealing character. The lap time is pretty amazing, too – 1:02.9 is just 0.4sec off a million-pound, 720bhp Pagani Huayra, yet the RXC has less than half the power and only a few hundred kilos less to carry around. It feels like you could match that time all day long, too.

It delivers a unique combination of a proper paddle-shift, a big-capacity multi-cylinder soundtrack and very exploitable handling. It’s a very well-sorted car.

As a track toy, there’s nothing like it. The only thing that comes close on price is the £89,940 BAC Mono, a single-seater with a 527bhp/ton power-to-weight ratio, nearly 100bhp up on the Radical, and an extreme focus the RXC can’t match. As a road car, it’s impossible not to look at the £100,540 Porsche 911 GT3 as incredible value in comparison. Where the Radical trumps one of the best performance cars on sale, though, is being exciting and truly interactive at all speeds – not just those that could see your licence torn up before your eyes.

We’re yet to drive the Radical RXC on the road, an environment where it promises more than its open-topped stablemates. We can’t wait to take it on a proper road trip.

Video of the Radical RXC in action on the road