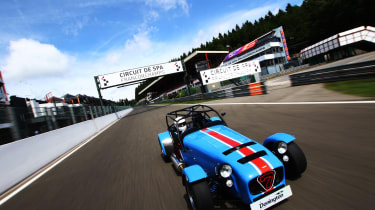 Caterham has celebrated the 60th anniversary of the Seven with the 160-based Sprint edition. So what’s this? Well, a coincidence, that’s what. 2017 is also 40 years since Donington Circuit reopened. To commemorate this milestone Donington-based Caterham dealership and trackday organiser BookaTrack has decided to build the ultimate trackday Seven.

Finished in Donington’s corporate colours, only 10 versions will be made, each sporting a plaque with a name from each corner of the circuit etched onto it; all except one that bears the name of Wheatcroft straight. That car will be the second car to be made – the first is the one you see here – and has been bought by Donington’s current owner Kevin Wheatcroft.

> From Lotus Seven to Caterham Seven - the lightweight legend turns 60

Rather than being constructed in Caterham’s main factory in Crawley, the Donington Editions will be built by BookaTrack in its Donington workshop. Despite such a strong connection to the Leicestershire circuit though, it feels odd that our first drive is instead at Spa Francorchamps in Belgium.

The Donington Edition concept is, essentially, based around a Caterham 420R. That means it’s powered by a naturally aspirated 2-litre four-cylinder Ford Duratec engine. The motor puts out 210bhp at 7600prm and 150lb ft of torque at 6300rpm.

One of the major differences between a regular 420R and the Donington Edition, however, is the gearbox. The Donington does away with the conventional manual in favour of the Sadev six-speed sequential ‘box found in the 620R and 420R race car. To suit the trackday nature of the car it has a friendlier clutch than the all-out racer, but one that’s sharper than the road car’s.

Caterham hasn’t revealed a 0-60mph time for the Donington but, thanks to that gearbox, you can expect it to be faster than a standard 420R’s time of 3.8sec. 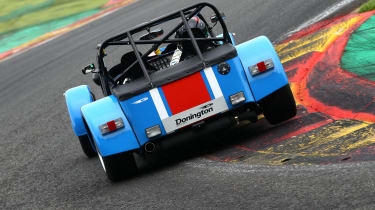 It isn’t just the transmission that separates the Donington Edition from the regular off-the-shelf model. Firstly, you can’t miss the comprehensive roll cage that encases the cockpit – it’s the same one from the 420R race car, previously known as the R300.

The Donington then uses the nose cone with more intakes from the supercharged 620R complete with the larger oil cooler. It also has the neater, carbonfibre dash from the 620R.

You probably won’t have missed the lack of windscreen after seeing the car in these pictures – it gets Caterham’s tiny aero screen instead – but what might have passed you by are the aerodynamic, oval shaped front suspension arms.

As well as nabbing all of the best bits from Caterham’s parts warehouse, the car’s creator, Stuart Faulds – BookaTrack’s chief engineer and a man who has also run plenty of Caterham race teams – has given the Donington a bespoke chassis setup. Not bound by the regulations of a race series, since it’s just trackday car, he was able to choose whatever components he liked. Faulds has a different approach to tuning a Seven for the track to Caterham, as a result the Donington has a different combination of dampers and anti-roll bar settings to any other Seven as well as a set of bespoke springs.

The end product is a stiffer Seven with a different balance to other Caterhams and, boiled down to its most basic philosophy, it’s proportionally stiffer at the front.

You have to climb into the Donington, clambering up onto its roof before threading yourself down into the seats. Not only does entering the car in such a manner give you a hint this is a bit more serious than your average Caterham, it makes you feel like your Bo or Luke Duke jumping into the General Lee – only much more British. We think that is a good thing; it might not be for some.

The illusion disappears somewhat when you have to strap yourself in with the four-point harnesses rather than immediately tearing off in could of dust – modern road and trackday rules are more strict than Hazzard county laws, thankfully.

Pulling away with a race clutch and sequential gearbox is always intimidating, I’d be lying if I said the Donington was simple to ease away and manoeuvre around the pits, but it certainly wasn’t impossible.

You still need to use the clutch once you’re driving, however it’s only essential on the way down through the gears – where you can also try to heel and toe to make the changes smoother. Blipping the throttle at the opportune moment is tricky though, the gearchanges are so fast that it takes time and practice before you get perfect changes every time.

> Read our review of the current Caterham range

Shifting up is much easier, and much more fun. An ignition cut activates when you pull the lever so you can keep the throttle pinned as you yank the selector back. Wait until the revs reach 7500rpm pull the gear stick determinedly, so that the gears change before the ignition cuts back in, and the engine only drops by 500rpm. With the engine screaming, banging up through the gears at full throttle is so exhilarating, and it makes just going in a straight line fun.

Yet still, no matter how enjoyable the straights are, it’s corners where the real entertainment is to be had. The Donington Edition is noticeably stiffer than an ordinary Caterham; the front doesn’t dive and roll around anywhere near as much. The entire car is more settled, less caricatured. 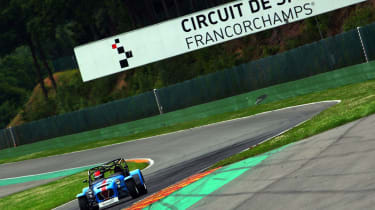 As a result, the grip is significantly higher and you can attack a corner at much higher speeds, the chassis supporting the car more effectively through higher loads.

Although the Donington’s grip is significantly greater, as you edge towards the tyres’ limits it still feels very much like a Caterham. And even though you’re traveling at a higher speed it’s just as controllable. If you brake deep and late into a corner you sense the grip from unloaded rear tyres gradually disappearing as you turn into a corner, the back-end wanting to swing wide. But you can contain that movement with the brakes; ease off and the Donington’s tail stays stuck, but keep some pressure on the middle pedal and you can dictate how the car enters the corner, pointing it towards the apex.

Get on the throttle quickly and you can then maintain that attitude throughout the corner, with the rear wheels slightly over rotating as you balance the angle with steering and the accelerator.

The stiffer front-end does mean that you can’t barrel into a corner without really adding pressure to the front tyres with the brakes; saw away at the wheel without preparing the chassis and it will understeer. However, to get the best from the car, you need to be committed with every aspect, including the brakes. When you do, the entire car makes sense. So much so that this could be the best handling Caterham there is.

Watch a lap of Spa in Caterham's new Donington Edition with Will Beaumont. Then read our review here: http://www.evo.co.uk/caterham/7/19731/caterham-seven-donington-edition-review-the-best-caterham-you-can-buy

Compared to the extremely fast 620R, the Donington is £2990 cheaper. And, as it's even more satisfying to drive and so rare, that makes it seem like quite the deal.

If your heart isn’t set on a Caterham, and you just want a competent trackday car you can hammer around a circuit in, £50,000, or thereabouts, gets you some very serious metal. A Lotus Exige Sport 350 is more usable on the road, but is still an exciting, dependable companion on track. An Ariel 3.5 Supercharged is more akin to the Caterham’s dedicated racecar-like approach, but at £38,000 it’s significantly cheaper.