The best Lotus you can buy just got better 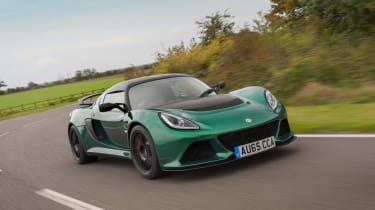 The replacement for the Exige S and the ultimate incarnation Lotus’ mid-engined V6 coupe: the Sport 350. It’s lighter and faster than the Exige S and is the next step on Lotus CEO Jean-Marc Gales' ladder to recovery for the British sports car maker.

While Lotus works behind the scenes on an all-new Elise scheduled for 2019, the existing range is coming in for a series of long overdue updates. These started with the Evora 400 revealed at the Geneva Motor Show in March and the Sport 350 is the next new model.

The Exige Sport 350 hasn’t undergone such a comprehensive update as the Evora did to become 400, the Exige has always been inherently right and therefore had fewer areas that required attention. The initial plan had been to fit the Evora’s 400bhp engine to the Exige, but in doing so it would have meant the engineers couldn’t get the car below the 1200kg target weight set by Gales. And it’s weight loss that has been the key focus, with 51kg taken out of the car reducing the kerb weight to 1125kg. 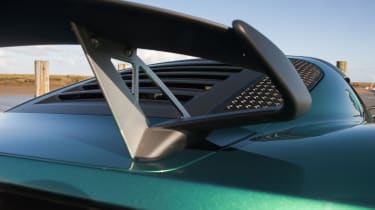 The Exige Sport 350 retains the 3.5-litre 345bhp Toyota-sourced supercharged V6 fitted to the Exige S, but what has changed is the manual six-speed gearbox.

The gearbox’s shift mechanism has been thoroughly overhauled with the new mechanism designed to provide a tighter, more precise and cleaner shift action – a bugbear of the standard Exige. The mechanism’s new components are machined from cast aluminium and result in a 1.5kg saving, it’s also on show in the transmission tunnel thanks to the new lightweight centre console. The six-speed automatic gearbox introduced earlier in 2015 is also available for the Sport 350.

Despite no additional power from the V6 engine, the Sport 350 is a tenth quicker to 60mph, stopping the clock in 3.7 seconds. Top speed remains at 170mph and it laps Lotus’ Hethel test track 2.5 seconds faster than the Exige S, setting a 1min29.8sec, the first production Lotus to get below 1min 30sec. 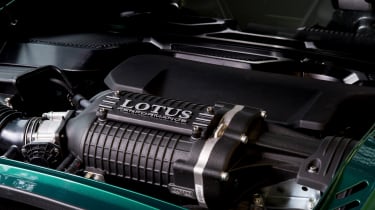 Under Jean-Marc Gales’ stewardship Lotus has been on a weight saving mission. Every Thursday Gales and his engineers enter the Lotus Lightweight Laboratory and go through the tables of parts and components that, had they made it to the factory floor would have been assembled to build a Lotus car. Instead, every part is inspected and scrutinised for suitability of purpose, the key questions asked being: is it the best part for the job? Are we paying the right price for the part and, crucially: is it the lightest available?

This fine-tooth comb policy can result in a part being redesigned – such as the Sport 350’s rear subframe, replaced – the engine cover is now a plastic louvered item (it not only saves 3kg but it improves engine cooling too), or removed altogether. 'We redesigned the HVAC system, it hadn’t changed in 20 years, and because of this there was a pipe we no longer needed. That was 3kg saved. And we had a system that heats up quicker, is more efficient and quieter too' explains Gales.

One of the biggest weight savings was 12kg in the body panels. Previously there could be as much as 4kg difference between the weight of one set of body panels and another but the manufacturing process has now been changed; quality control improved, and every body panel on every Sport 350 will weigh the same - and crucially less than before.

The Sport 350 programme focused on weight loss and with lower mass the engineers could also focus on fine tuning the chassis further. Camber, toe and bump-steer have all been changed, the toe angle to allow a degree of pre-load in the tyres (a Pirelli P Zero Corsa, or Trofeo R if you’re track focused) to eliminate the nervousness the Exige suffered on less than perfect surfaces. The steering rack has also been repositioned and the rear wheel is half an inch wider at 10 inches. There’s also a new lightweight forged wheel that saves 5kg of unsprung weight, which Lotus can afford to fit thanks to the cost savings made by improved purchasing efficiency. 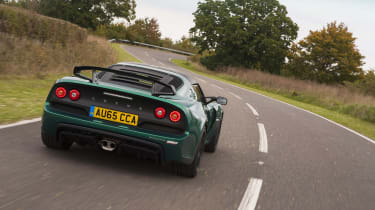 There was little, if anything wrong with the original Exige S – it was our Car of the Year in 2012 after all, but it doesn’t take long to appreciate the changes the Sport 350 brings.

The engine, not the most orchestral in the business, still surprises with its tractability and low down torque that feels like it’s permanently ready and waiting for you to ask it to get on with it, which it does with effortless ease. But it’s not the engine’s performance that grabs you, it’s that first gearshift.

Whoever you worship thank them, because Lotus has a gearshift it can be proud of and you can use. It’s not only tight around the gate, but precise and intuitive and within three or four shifts your left hand drops instinctively to go up and down the ratios, no longer do you need to make a conscious effort to change gear and be prepared to wrestle it home. If this was the only upgrade Lotus had made to the Sport 350 we’d be very happy. But there’s more.

The chassis work has resulted in an even more precise machine. There’s no longer a small delay when you first apply an amount of lock before the front axle reacts, instead it’s instant but crucially it’s not too quick nor edgy, but linear and precise and installs immediate confidence.

Combine the steering changes with the other chassis upgrades on the road – a more compliant ride despite stiffer Exige Cup dampers, improved body control, increased grip levels and the more relaxed nature and settled movements on poor road surfaces – and the Sport 350 draws you in. It encourages you to push harder, brake later and deeper into the corner (the optional lightweight discs fitted to our test car were some of the best we’ve tried: progressive pedal travel, easy to modulate and as strong at slowing the car as the supercharged motor is at accelerating it) and lean on the outer tyres’ grip, and play with that brilliant chassis beneath you.

Around Lotus’ Hethel track the high-speed balance is exceptional, its adjustability on the throttle so precise and manageable that you drive below, on or over the limit of adhesion however you see fit. Overcook it on the way in and a lift tucks the nose in. Over-stretch the right foot too early in the turn and as the rear begins to arc around, gathering it up requires a simple controlled roll of the wrists or feathering of the throttle. Get it unsettled in the quicker stuff and little more than degree of corrective lock is required as you chase the throttle on the exit. And the best bit is you don’t need to be a lap record holder to experience the best of the Sport 350. It’s as forgiving as it is exciting, and soon you can drive it on the throttle, controlling every aspect with the slightest of inputs.

Lotus didn’t have to do much to the Exige S to improve on its ability, but in the Sport 350 every area is improved by 25 per cent, the result being an even more engaging and enthralling car than before. It’s no Porsche Cayman GT4 in terms of ease of use (it doesn’t get the Evora 400’s revised chassis so getting in and out requires a level of contortion) and the NVH levels, though improved, can’t mask the bare extruded aluminium chassis, glass fibre body and that harsh engine note. But there are few, if any that deliver the uncorrupted thrill of an Exige Sport 350. 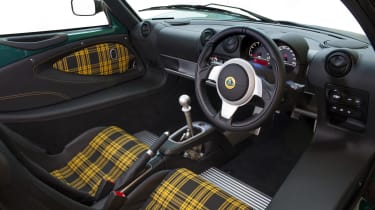 And undoubtedly the GT4 is worth every penny and more. It is, like the Sport 350’s predecessor, a Car of the Year winner. It is one of the finest Porsches of the modern era and one of the true sports car greats.

But as Porsche goes more mainstream, Lotus stills offers the undiluted driving thrills we crave. When we get the two together, it will be a fascinating comparison.

The Exige Sport 350 costs £55,900. Lotus has trimmed the options back from 16 to just nine; key amongst these are the two-piece high performance brakes. Other options include Alcantara, leather or Tartan trim – a nod to Lotus’ past – air conditioning, and a radio; the car’s 1125kg kerb weight is measured without the latter two components.