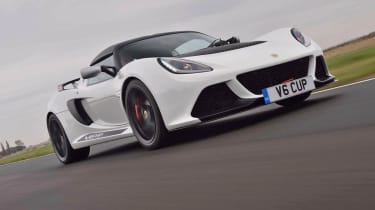 What is it?  The latest generation is of Lotus Exige is longer and wider than the original, and comes with notably more potent V6 power. It feels like a mini supercar and proved exciting enough to share our 2012 Car of the Year honours with the Pagani Huayra. A year later, a Roadster version accompanied the Exige S in the price lists (and is almost identical to drive) while there is now the offer of the hardcore Exige V6 Cup. Exige prices start at £52,900, with the cup requiring an additional £10,000. Technical highlights?  Supercharged 3.5-litre engine aside, the biggest piece of technological trickery is the new Dynamic Performance Management system. DPM is Lotus’s version of ESP with Touring, Sport, Race and Off being the settings. It is capable of both curbing understeer and also optimising traction out of corners (there’s no limited-slip diff) and it can even learn which tyres you’re using – Pirelli P Zero Corsas are standard, Trofeos an £800 option – by calculating slip.

The extra ten grand you’ll have to find for the Cup doesn’t buy you any extra power. It has exactly the same Toyota-sourced 3.5-litre supercharged V6 with exactly the same 345bhp peak output. Performance gains have instead been made on the other side of the power-to-weight ratio, with a comprehensive stripping-out reducing the Cup’s mass to just 1110kg – 66kg less than the Exige S.Trim is predictably minimal, with the cabin floor and sills in bare alloy, and switches for the battery isolator and fire extinguisher where you’d normally find the audio system (which isn’t even an option). There’s a correspondingly serious-looking fire extinguisher bottle filling most of the passenger footwell, while the seats are carbon-framed motorsport buckets with four-point harnesses.

As standard, the only thing preventing the Cup from off-the-shelf competition use is the lack of a roll-cage for the front of the cabin, but Lotus will sell this as an option; apparently several buyers are planning to race their cars in the Lotus Cup. The only real concession to comfort is the £1100 option of air con. What’s it like to drive?

The Exige S feels stunningly quick, to the point where the claimed 0-62mph time of 3.8sec seems almost conservative. It might not have the most charismatic V6, but it has an addictively rich seam of punchy torque thanks to that supercharger. It has ride quality and steering that leave you in no doubt about the road surface you’re travelling over.

The supercharged V6 makes a world of difference to the character of the car. It’s a stunningly strong engine and throttle response is scintillating, no matter where you are in the rev range. Even in sixth gear on the motorway the Exige will leap forwards eagerly at the slightest prod and on an A- or B-road it is as fast as you could realistically want. The quicker steering is exactly what you would expect from Lotus – full of feel and it dances in your hands as the car follows the cambers of the road. With a heavier mid-mounted engine you might expect the Exige to feel tricky on the limit, but on wet roads it would swing progressively either with a lift or by keeping your foot in. It was easy to catch too, which is not something you could say of the old four-cylinder car. The Sport setting on the DPM was perfectly judged on the road, allowing an interesting amount of slip before reigning things back in beautifully calmly. Last but not least, the new V6 sounds great – there’s something of the historic racecar about its rich growl and there’s no overpowering supercharger whine either.

"There is no inertia to the way it gets into corners, plus there is huge grip at all 4 corners and real genius to the damping"- Dan Prosser evo 209

The Exige Cup is a committed car and may be hard work in the real for some - it feels far more firmly suspended than any other Lotus we’ve ever taken on the road. The steering is alive, too. Almost literally – the firmness of the front end means that everything gets through, both good and bad, with bumps and camber changes doing their best to tweak the wheel out of my hands. But behind that, there’s a beautifully nuanced weighting that leaves you in no doubt what the front tyres are up to. As they heat up, the consequent rise in grip gets faithfully passed on. How does it compare?  The Exige's price point puts it up against tough rivals - those seeking a road and track capable sports car can buy a Porsche Cayman GTS (or its Boxster sibling) or the new BMW M4 coupe for similar money. The Lotus is a deliberately dedicted choice, though, and if you can forgo some day-to-day practicality it delivers bigger thrills and higher highs than any of its less compromised foes.

Anything else I need to know?  Given the choice between standard Exige S and Exige V6 cup, which would you pick? The Exige S remains an awesome thing – our joint Car of the Year in 2012, don’t forget – and if you’re going to spend most of your time on the road, it remains the better car. It’s not that the Cup can’t cope with the real world; with the dampers fully softened it would probably be mega. But it remains a track car at heart. Which is why, if you want to reverse the equation and consider its merits as a circuit weapon and occasional B-road warrior, the Cup is the better bet.

However, if you don’t mind never taking your Exige on road, and have an extra £12,000 burning a hole, there’s also an even more extreme track-only Cup R to consider...

Each of these four-cylinder, rear-wheel-drive coupes offers plenty of driver appeal, but which gets your £30k?
Visit/lotus/exige/21252/lotus-exige-sport-410-review-first-drive-of-latest-mid-engined-sports-car 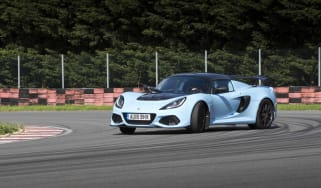 Mixing the performance of the Cup 430 with the usability of the Sport 350, the new Sport 410 is the pick of the Exige line-up
Visit/lotus/exige/21216/new-lotus-exige-sport-410-revealed 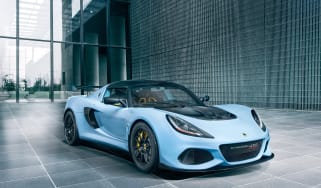 The Lotus Exige Sport 410 benefits from a raft of upgrades courtesy of the Exige 430 Cup.
Visit/lotus/exige/21061/limited-edition-lotus-exige-cup-430-type-25-revealed 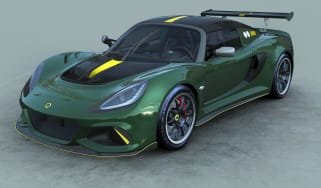 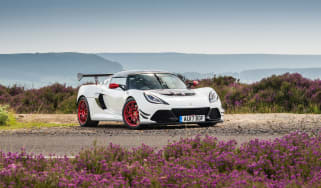 Lotus Exige 380 Cup review – leaner, faster and harder than ever before

The most extreme road-going Exige, the Cup 380, is one of the best drivers’ cars at any price
Visit/lotus/exige/19610/lotus-exige-s-review-specs-and-used-buying-guide 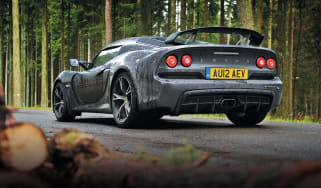 Joint winner of evo Car of the Year 2012, one of the great modern Lotuses, and now with prices starting below £40k
Visit/lotus/exige/19255/lotus-exige-cup-380-limited-edition-exige-is-a-road-legal-racer 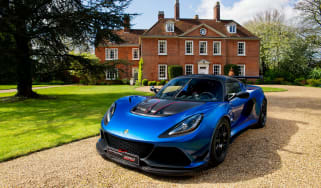 The Cup 380 is Lotus’ most hardcore yet; extreme weight saving, extra downforce and wider tyres all feature
Visit/lotus/exige/18357/lotus-exige-350-special-edition-revealed-an-even-lighter-exige 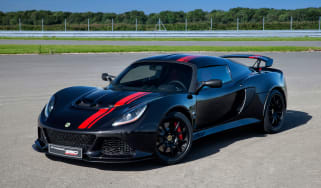 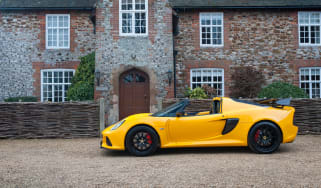 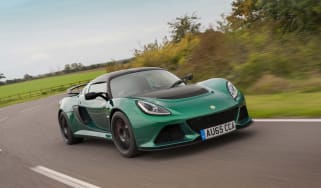 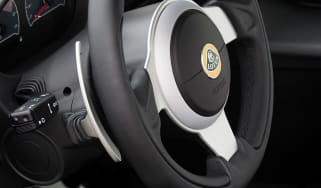 Quicker than a manual, but not by much
Visit/lotus/exige/13985/lotus-elise-s-cup-announced 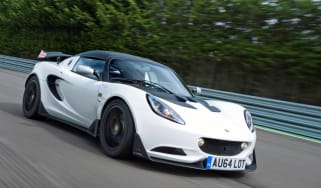 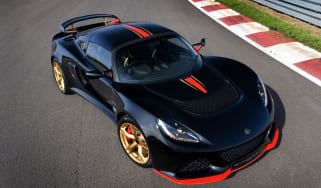 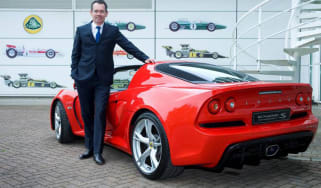 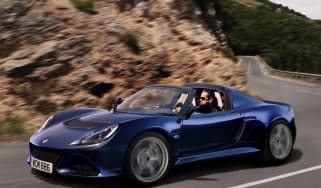 Lotus prices and specs up its new Exige S Roadster. It's the fastest Lotus convertible yet
Visit/lotus/exige/13205/lotus-exige-s-roadster-video 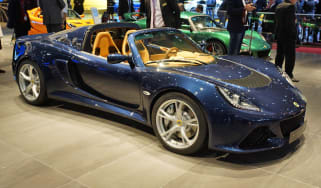 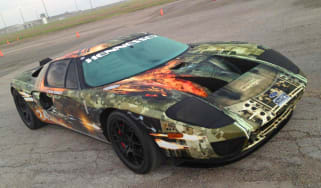 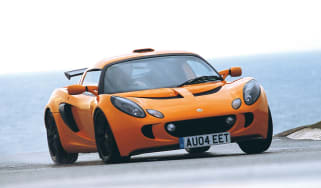 The Lotus Exige S2 built on the original with a tough new engine, more power and options aplenty. And now you can get one for just £17K.
Visit/lotus/exige/6221/lotus-exige-s-vs-c63-black-m3-gts-911-gt3-rs-40-and-nissan-gt-r-track-pack 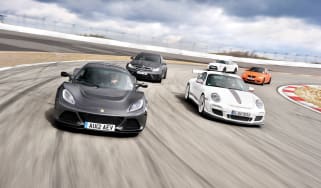 Is the 345bhp Exige S the car that will take Lotus to the next level? We pit it against four hardcore rivals from Mercedes, Nissan, BMW and Porsche to…
Visit/news/evonews/283438/latest_issue_of_evo_magazine.html 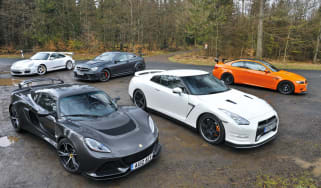 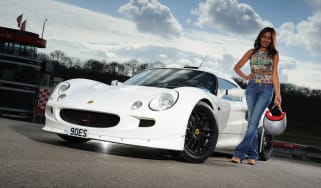 Me and my car: Sona Lewis and her 422bhp Lotus Exige 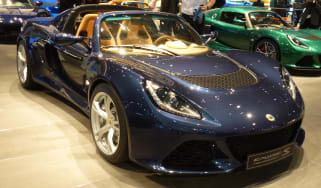 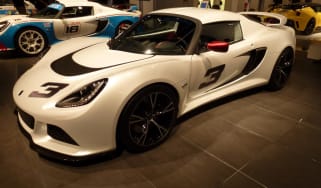 Lotus has shown the new V6-engined Exige S at the 2011 Frankfurt motor show, in addition to its Exige R-GT rally car
Visit/features/features/264079/2010_evo_track_car_of_the_year.html 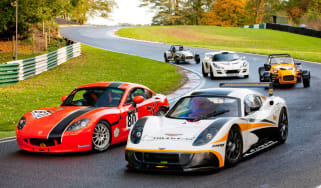